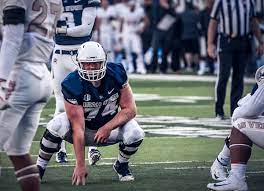 I see two players battling for the top spot on the depth chart, senior Chandler Dolphin and sophomore Falepule Alo.

After seeing plenty of first-team action during spring ball, senior Chandler Dolphin could be the first man up on the depth chart. As a junior in 2020, he saw action in 2 games. As a sophomore in 2019, he saw action in one game, recording 17 snaps. As a redshirt freshman in 2018, he took 26 snaps and recorded 2 knockdown blocks in 4 games. As a true freshman in 2017, he spent the season playing on the Aggie practice squad and received a redshirt season. As a senior at Alta High (UT) in 2016, Dolphin earned Utah 4A first-team all-state honors from both the Salt Lake Tribune and Deseret News. Dolphin is the kind of raw, athletic, unheralded talent that Utah State has thrived on developing into solid offensive linemen in recent history. He is a versatile player that can play both guard and center. The coaching staff believes that he has improved as an offensive lineman and plays with great aggression.

Also competing at a high level is sophomore Falepule Alo. As a true freshman in 2020, Alo saw action in 5 games and was the starter in 4 of them. As a senior at West High (UT) in 2019, Alo earned first-team all-region honors as he helped West to a 4-6 record in Utah’s largest classification of 6A. Falepule is a monster up front on the offensive line. He does a good job of gaining leverage on an opposing defensive lineman and driving him from the line of scrimmage. He is going to benefit from getting into a collegiate strength and conditioning program, as well as having the opportunity to learn from what is becoming a veteran Utah State offensive line. With him still receiving a lot of interest from peer Mountain West schools such as Colorado State and Air Force, landing a player with his talent this late in the recruiting process is a really big find by the Aggie coaching staff.

Coming Up On Monday: Wide Receiver