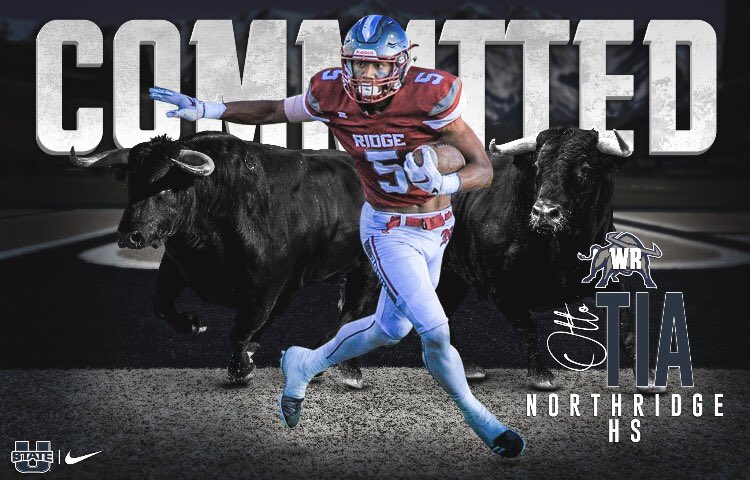 The Utah State coaching staff got some big news the afternoon of October 14th . Northridge High (UT) athlete Otto Tia was calling to inform the staff that he was giving them his verbal commitment with the intention of being a member of the 2020 signing class. Otto is currently unranked by 247sports but is indeed one of the top high school athletes in the State of Utah. Otto had a successful 2019 senior season as he played both sides of the ball accounting for 33 receptions for 560 yards and two touchdowns as a wide receiver. 13 carries for 23 yards and two more touchdowns. Defensively Otto was credited with 20 tackles and two sacks. As a junior in 2018, Otto made 31 receptions for 623 yards and one touchdown as a wide out and racked up 30 tackles, four sacks and five interceptions defensively.

I had the opportunity to have a Q&A with Otto about his commitment to the Aggies.

BP: I know it’s early but are you planning on signing with the Aggies in December or February?

OT: I plan on signing in February.

BP: Have you had on opportunity to unofficially visit the Utah State campus yet?

OT: Yessir. I loved it up there. Just an amazing atmosphere and great coaching staff.

BP: What was your first impression of the school and the football program?

OT: I plan on signing in February.

BP: Have you had on opportunity to unofficially visit the Utah State campus yet?

OT: Yessir. I loved it up there. Just an amazing atmosphere and great coaching staff.

BP: What was your first impression of the school and the football program?

OT: The type of player I think I am, is a player that builds up their team and will do his best to try and get the team a win and would put the game over himself. And I will be the one to make a play to get things going and to finish. What I bring to the table is that guarding me isn’t going to be easy.

OT: I feel like something I do best is make a play. Some skills that are my strong point is my route running. Last year I was more of a deep guy but this year I had to become a more elite route runner because I’d be keyed on by other teams and would need to run good routes in order to get open.

BP:  I really dig your honest and open opinion about yourself and what you felt you needed to do to get better! Don’t lose that drive dude!

BP: I LOVE your straight to the point easy confidence! What Aggie coach or coaches were your primary recruiters during the process?

OT: BYU and Weber State and University of Utah.

BP: What goals or aspirations did you have leading into the upcoming season? And what do you feel you have left to accomplish this year?

OT: My goal coming into the season was to be region champs. But we didn’t have the best season so now something we have left to accomplish is finishing out the season strong.

BP: Have you talked to any of the other guys that have already committed?

OT: Yea I’ve talked to many people that are committed!

BP: Awesome! They are a good group of dudes!

BP: What position do you plan on playing?

OT: I’m not sure yet? Wherever I fit best for the team.

BP: That sounds good. The coaching staff will appreciate your team first attitude!

OT: I chose to commit to Utah state because they’ve been there from the beginning. They were committed to me. They were my first offer and I don’t think there hasn’t been a week where they didn’t contact me since April.

In my opinion, I think Otto best projects as a classic Aggie. Already standing at 6’3 and having the shiftiness to navigate defenses as a wide receiver, Tia is the type of player who is dangerous with the ball in space. He can be used in multiple ways; over the middle, on deep throws, and jet sweeps. He excels at picking up yards after the catch and finds another gear after securing the ball. He has the exceptional size that allows him to go up and high point the football in the air. I think he is a good bet to become a key player for the Aggies at some point in his career. Otto is a big in-state pick up in what is really the new coaching staffs first real recruiting class of their own.