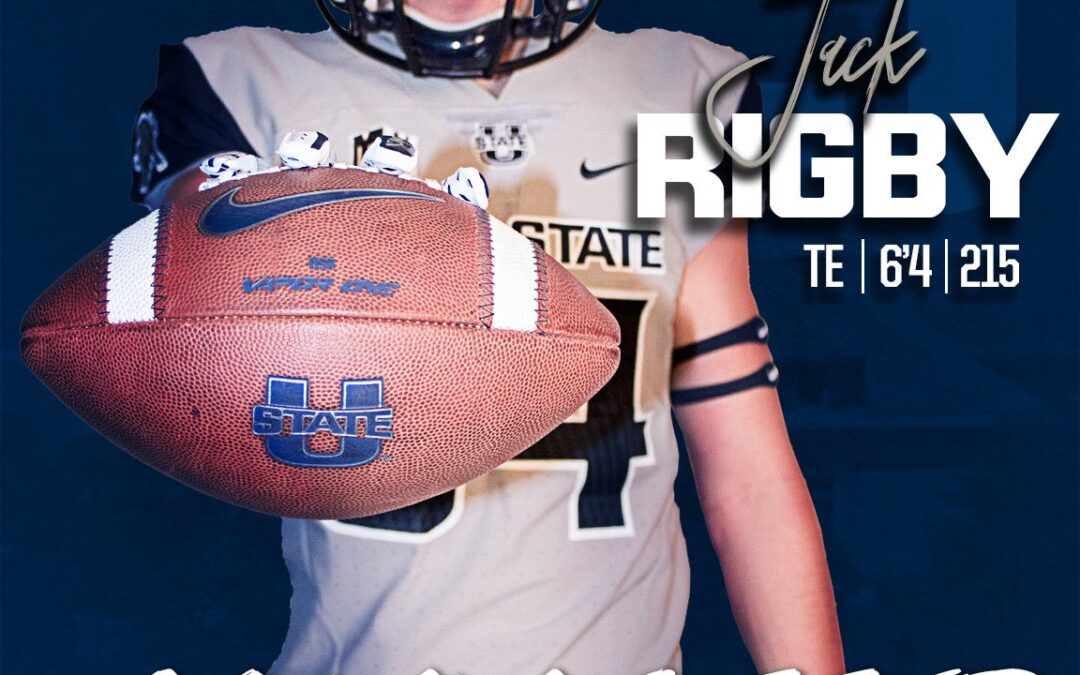 The Utah State coaching staff got some good news back on the afternoon of February 13th as Davis High (UT) tight end Jack Rigby informed the Aggie coaching staff that he was verbally committing to join the Aggies. On Monday, June 10th Rigby made that commitment a reality, as he inked his name to a national letter-of-intent. Rigby will join the Aggies in time for the 2021 season as he will serve an LDS church mission prior to enrolling at Utah State. As a senior in 2018, Rigby hauled in 35 receptions for 621 yards and 6 touchdowns.

I had the privilege of speaking about Jack’s commitment and subsequent signing with Davis Head Coach Mitch Arquette.

To begin our conversation I asked Coach Arquette what can we as Aggie fans expect from Jack on the field? ” Dynamic pass catcher, big body with great athleticism.”

As a coach how do you feel about Jack as a player and as a person? “Determined, hard-working, fun young man to be around.”

As we continued our conversation about Jack, I asked Coach Arquette how he felt the season went for Jack? “Very well, 2nd on the team in catches, YPC (yards-per-catch), and touchdowns.”

I asked Coach Arquette if Jack had earned any post-season honors or accolades that he would like to report? “2nd Team All-State, 1st Team All-Region 1 and All-Area, Team Captain.”

Other than Utah State, what schools were taking a serious look at Jack? “byu and Dixie State.”

As I wrapped up my conversation with Coach Arquette, I asked why he felt Jack chose Utah State? “Div. 1. (A) chance to continue playing with high school teammates (QB Garrett Larson and K /P Will Ferrin).”

Once Rigby returns from his church service, he will to give the Aggies several very good sized tight ends that the coaching staff will be able to mold into a pair of bookend tight ends much like how Utah State  liked to operate when Kellen Bartlett and DJ Tialavea gave the Aggies a ton of flexibility and versatility from the tight end position. I spoke with Rigby earlier this morning and he plans to return to Utah State near the end of June 2021. That will be early enough for him to participate in fall camp.