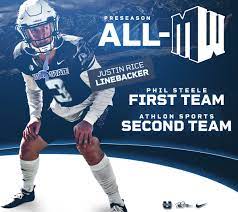 The Aggies hit a homerun when they landed the services of graduate transfer senior Justin Rice. Rice joins the Aggies after spending the 2020 season at Arkansas State. He will have one year of eligibility remaining. As a senior at Arkansas State in 2020, he started in all 11 games and rolled up 53 tackles, 12.5 tackles-for-loss, 6.0 sacks, and 1 pass breakup. Rice began his collegiate career at fellow Mountain West Conference mate Fresno State. As a redshirt junior in 2019, he started in all 12 games and racked up 112 tackles, 8.0 tackles-for-loss, 3.0 sacks, 2 interceptions, 10 pass breakups, 4 forced fumbles, and 2 fumble recoveries. As a junior in 2018, he saw action in 4 games and made 4 tackles before missing the remainder of the season with an injury. As a sophomore in 2017, he played in 10 games and logged 9 tackles and 2.0 tackles-for-loss. As a true freshman in 2016, he initially played running back and saw action in 6 games, earning 1 start and recorded 6 carries for 11 yards and 2 receptions for 15 yards. Justin returns to the Mountain West after a year away. He played a multitude of positions in high school, displaying his athletics and play-making ability. He is a hard, physical tackler who flies around the field, flocking to the ball and making plays. He can also handle coverage responsibilities with no issue. Being a former Fresno State player, he has invaluable knowledge of the conference to go along with his skills, which should allow him to dominate on the field.

Adding depth to the position is preferred walk-on sophomore, Kina Maile. As a true freshman in 2020, he played in 4 games and was credited with 9 tackles, 1 fumble recovery that he returned 16 yards for a touchdown during the Aggies win versus New Mexico. He also blocked a punt during that game. Maile joined the Aggies in time for the 2020 winter semester following his return from serving an LDS Church mission. As a senior at East High (UT) in 2015, Maile was credited with 25 tackles, in what turned out to be an injury-shortened season for him. Maile is a mobile linebacker for his size. He is good in space and drops into coverage well. He can deliver a vicious hit and he is not afraid of contact. He does a good job of diagnosing running plays and fighting off blocks to make the tackle.

Looking to make some noise is true freshman Sione Moa. Moa joined the Aggies in time for spring ball in January after serving an LDS Church mission. As a senior in 2018 at Weber High (UT), he was a threat on both sides of the ball as he racked up 58 tackles, 7.0 tackles-for-loss, 6.0 sacks, and 1 forced fumble. Offensively he pulled in 27 receptions for 370 yards and 2 touchdowns. As a junior in 2017, he starred as a wide receiver snagging 40 receptions for 430 yards and 2 touchdowns. As a sophomore in 2016, he caught 15 passes for 154 yards and 2 touchdowns. Moa is a good athlete, who was athletic enough to be a wide receiver in high school but will suit up as a linebacker in college. He looks like a natural fit as a pass-rushing LB who uses speed and a running start to blow by blockers and get to the quarterback. He can also drop back into coverage and his speed and height allow him to match up with tight ends very well. He can also play well in run support, flying around to plug up holes and match the speed of the running back. He should be a great weapon for the Aggies in the future and should be tough to keep off the field.

Looking to make a move up the depth chart is sophomore Simon Thompson. As a redshirt freshman in 2020, he did not see any action. As a true freshman in 2019, Thompson saw action in 1 game but he did not record any stats and was still able to retain his redshirt status for the season. As a senior at West Salem High (WA) in 2018, Thompson totaled 54 tackles, 1 interception, and 1 forced fumble as a safety defensively. Offensively, as a quarterback, he threw for 2,403 yards, 30 touchdowns, and 12 interceptions. He also showed his versatility as a runner picking up 571 yards and 5 touchdowns on the ground. He also ran the ninth fastest 110 meter hurdle time in Oregon high school history as a junior. Thompson has excellent speed and will make life very difficult for opposing offenses. He has great hands and isn’t afraid of contact thanks to his time spent on the defensive side of the ball. He is athletic enough that he may not stay at linebacker throughout his career and he could play another position as he progresses through his time here at Utah State. Thompson is a tremendous athlete with great length and speed and that is exciting to the Aggie coaching staff.

I see junior AJ Vongphachanh being the starter at this position. As a sophomore in 2020, he played in all 6 games, starting in 5 of them, and racked up a team-leading 50 tackles, 3.5 tackles-for-loss, 3.0 sacks, 1 pass breakup, 1 QB hurry, 1 forced fumble and he recorded 1 safety during the win versus New Mexico. For his effort in 2020, he earned Honorable Mention all-Mountain West honors. As a true freshman in 2019, he saw action in 7 games, earning 1 start, and being credited with 17 tackles. As a senior at Chiawana High (WA) in 2018, Vongphachanh had a standout season destroying offenses and rolling up 113 tackles, double-digit tackles-for-loss, 8.0 sacks, 1 interception, and recovering 1 fumble that he returned 40 yards for a touchdown. He made a very strong case to be the most dominant defensive player in the Mid-Columbia Conference (WA) over the past four years. He accumulated three first-team All-League Linebacker awards. He won MCC Defensive Player Of The Year and was also selected to the 4-A all-state team. Vongphachanh turned down late interest from Big-12 member Kansas to sign with the Aggies. Vongphachanh has little trouble getting into the backfield and making life difficult for the QB and seems to have advanced moves for pass-rushing. He is a very athletic player, who has a great motor and he uses those gifts to go out and just make plays. He moves well laterally and diagnoses run plays as they are developing and plugs up the gaps. He is still young at the position and the sky is the limit for what he can accomplish with his remaining time in an Aggie uniform.

Graduate senior Kevin Meitzenheimer will once again fill the middle of the Aggie defense in 2021. As a senior in 2020, he started in each of the 5 games he was available for and rolled up 37 tackles, 3.5 tackles-for-loss, and 0.5 sacks. As a junior in 2019, he started in all 13 games and racked up 89 tackles, 2.5 tackles-for-loss, 1 interception, 1 pass break up, and 1 forced fumble. After missing the first month of 2018 with a knee injury as a sophomore, he played in 9 games and made 13 tackles, 2.0 tackles-for-loss, and 1 interception. As his 2017 redshirt freshman season came to an end, he saw his role in the defense increase as he saw action in 10 of 13 games, including major reps in the final five games as he recorded 19 tackles on the season. After his senior season at Moreno Valley High (CA) in 2015, Meitzenheimer earned CIF second-team all-state honors after amassing an astounding 167 tackles, 7.0 tackles-for-loss, 4.0 sacks, 2 interceptions, one of which he returned for a touchdown and 1 forced fumble. Meitzenheimer had an impressive offer list before signing with Utah State that included PAC-12 school Washington and Mountain West Conference rivals Boise State and Colorado State. Meitzeheimer is another extremely athletic linebacker that is versatile enough to play both inside and outside positions. He is a prime candidate for this position because he has developed into a very good run-stopping linebacker. He possesses great hands and has become a very good tackler. He excels in reading and reacting to the rushing attack of the opposition and does a great job of stepping up and filling the gap.

Competing to make an impact on the depth chart will be sophomore Jaymason Willingham. As a redshirt freshman in 2020, he did not see any action. As a true freshman in 2019, Willingham sat out the season as a redshirt. As a senior at Steilacoom High (WA) in 2018, Willingham had an amazing season and displayed his athletic ability on both sides of the ball. As a linebacker, he racked up 124 tackles, 22.0 tackles-for-loss, 15.0 sacks, 1 interception, and 2 forced fumbles. For his effort on defense, he was named the South Puget Sound League Defensive MVP. As a running back offensively, he had 133 carries for 1,189 yards and 16 touchdowns. Willingham is a very athletic linebacker and overall is a very versatile football player that has played several different positions throughout his high school career. He has a nice size and has the tremendous closing speed to the ball. He is skilled at blitzing in the gaps and stepping in to shut down the run game. He’s a solid downhill runner who diagnoses plays quickly and commits to making the play. He plays very well sideline to sideline and he’s tremendous at getting pressure on the quarterback and causing havoc in the backfield. He moves well and he’s very physical.

Adding depth to the position is return missionary true freshman McKay Breshears. Breshears joined the Aggies in time to participate in summer workouts. As a senior at Declo High (ID) in 2018, he won back-to-back 2-A Idaho state championships. As the starting quarterback for the Hornets, he amassed 2,362 total yards and 28 touchdowns. He also racked up 67 tackles on the defensive side of the ball. At press time, I did not have statistics for any of his remaining high school career. Breshears was a good two-player in high school. I think that his time spent at quarterback actually helps him on the defensive side of the ball. He diagnoses the play very early in their development and that allows him to blow things up before they can get going. He is a good form tackler and ball carriers rarely get away once he gets ahold of them. He has great feet from being a multi-sport athlete and he has the adequate speed for the linebacker position.

Coming Up On Friday: Defensive End