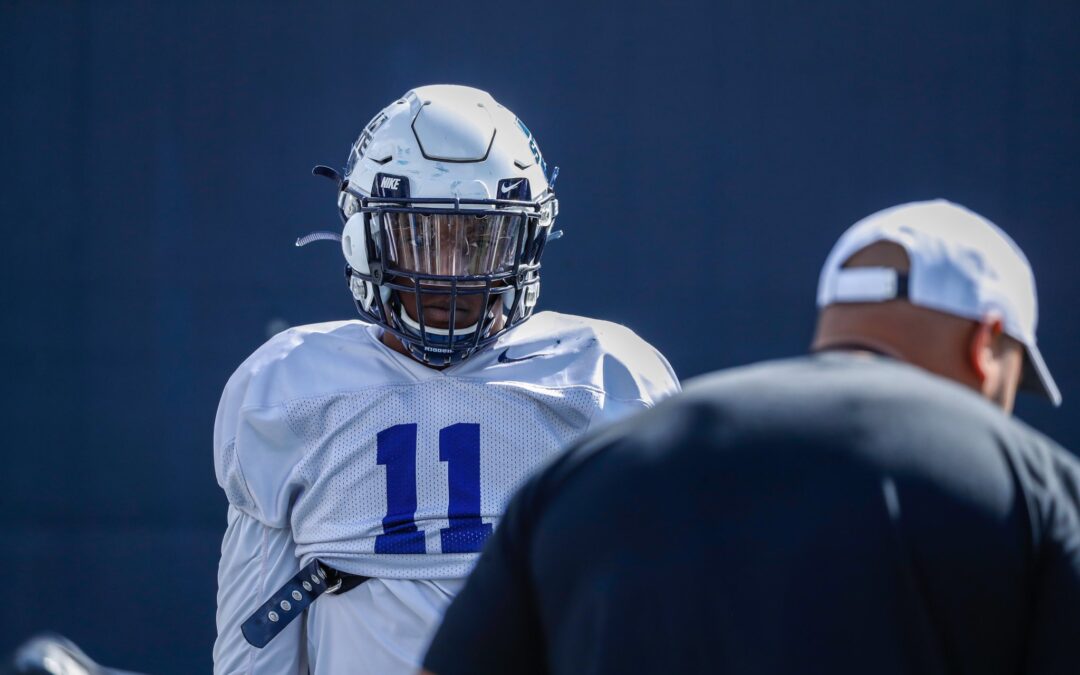 I see junior University of Texas transfer Byron Hobbs-Vaughns getting the starting nod at this position. Hobbs-Vaughns joined the Aggies in time for spring ball after moving on from Texas. He should have 3 years of eligibility remaining. As a sophomore in 2020 at Texas, he did not record any stats. As a redshirt freshman in 2019, he saw action in 10 and logged 14 tackles and 1 forced fumble. In 2018 as a true freshman, he spent the season redshirting at the University of Texas. What has initially jumped out on film to me is his ability to be a tenacious pass-rusher with a high motor. He is a premium athlete who even played wide-receiver in high school to showcase his speed and play-making ability. He is physical on the line and gets by blockers with no problem. He was a menace all spring ball for the offensive line to contain. He hunts quarterbacks and running backs like they are food and he is starving.

Looking to push for playing time will be graduate senior Jaylin Bannerman. As a senior in 2020, he played in 4 games and recorded 2 tackles and 1.0 tackles-for-loss. As a junior in 2019, he saw action in 6 games, including 1 start, a was credited with 5 tackles and 1 pass breakup. As a sophomore at Arizona Western Community College in 2018, he was credited with 28 tackles, 2.5 tackles-for-loss, 1.5 sacks, and 1 fumble recovery. Bannerman originally signed with and spent his first two collegiate seasons at the University of Kentucky. As a senior at Pickerington High (OH) in 2015, Bannerman earned first-team all-conference and second-team All-Central District honors. Bannerman is a long-framed athlete who is raw but shows signs of being a high-level player in the coming years. He is physically strong and quick. He can play standing up as an outside linebacker or he can put his hand in the dirt as a rush defensive end. He rarely gets pushed back at the point of attack. His length and athleticism will allow the Aggie coaching staff to do a couple of things with him. First, he can stay at the defensive end and add bulk without losing his athletic ability. He could also add less bulk and take a step back and line up as a linebacker depending upon where in the scheme the Aggie coaching staff envision him fitting best.

Looking to make a move up the depth chart is transfer preferred walk-on redshirt freshman Darius McFarland. McFarland joined the Aggies this summer after spending the first two seasons of his career at byu. He should have 4 years of eligibility remaining. McFarland chose to opt-out of the 2020 season. As a redshirt freshman at byu in 2019, he saw action in 5 games but did not record any stats. As a true freshman in 2018, he saw action in 1 game but did not record any stats and was able to maintain his redshirt status. McFarland is a classic edge rush defensive end. Having played all over the field in high school he is a very versatile player and could potentially play all over the defensive line if needed. He is strong enough to hold himself at the line of scrimmage but he is also agile enough that he can push past opposing offensive linemen and get into the backfield. His athleticism is deceiving and he does a fantastic job of making that work to his advantage.

Adding depth to the position is true freshman Holden Tennant. As a senior at Bingham High (UT) in 2019, he racked up 64 tackles, 11.0 sacks, 4 pass breakups, and 3 forced fumbles. For his effort, he earned second-team all-state honors and all-region accolades. During an injury-shortened junior season in 2018, he recorded 5 tackles. Tennant is relentless when it comes to the pursuit of the football. He has a good first step and he is often able to beat his man to the edge. He wraps up very well. Opposing ball carriers rarely escape him once he’s got a hold on them. He is good at slipping right past interior linemen. He loves contact and is very physical at the line of scrimmage.

The battle for the top spot at this position will be a good one and it will come down to two players. The first player on my list is junior University of Miami transfer, Patrick Joyner. Joyner joined the Aggies in time for spring ball and he should have 3 years of eligibility remaining. As a sophomore at Miami in 2020, he saw action in 4 games and logged 1 tackle. As a redshirt freshman in 2019, he missed the season with an injury and did not record any stats. As a true freshman in 2018, he saw action in 4 games while still maintaining his redshirt status and recorded 5 tackles and 2.5 tackles-for-loss. Joyner is an energetic pass-rusher who doesn’t give up on plays. He displays a combination of strength and speed that allows him to attack the quarterback with little issue. He doesn’t over-pursue on a play and squares up well on his hits to prevent players from escaping. He is a fluid athlete with great lateral agility. Because of his explosive first step, he mostly tries to run around offensive tackles but shows proficiency with an inside swim move. He has Good hand usage and shows awareness of ball carriers while engaging with blockers.

Graduate senior Nick Heninger will not be giving up the top spot on the depth chart easily. As a senior in 2020, played in all 6 games and started in 5 of them, and amassed 42 tackles, 7.0 tackles-for-loss, a team-high 3.0 sacks, 1 QB hurry, and 3 forced fumbles. For his effort during the 2020 season, he earned Honorable Mention all-Mountain West honors. Heninger joined the Aggies during the summer of 2019, just as fall camp was beginning after graduating from the University of Utah and electing to transfer. As a graduate transfer in 2019, Heninger played in all 13 games and had a solid first season posting 32 tackles, 9.5 tackles-for-loss, 5.0 sacks, 2 pass breakups, 1 forced fumble, and 2 fumble recoveries. As a sophomore at Utah in 2018, he played in 11 games and was credited with 2 tackles, 1.0 tackle-for-loss, 1.0 sack, 2 pass breakups, and 1 fumble recovery. As a redshirt freshman at Utah in 2017, he played in all 13 games and logged 11 tackles, 1.0 tackle-for-loss, and 2 fumble recoveries. He is very aggressive when he attacks the ball and is very good at reading and reacting to an opposing offensive play. He is a sure tackler in the open field, which is a must at this position. He is very adept at stripping the ball from opposing ball carriers and setting the Aggies up for potential turnovers. He has a natural athletic ability that should allow him to drop into pass coverage with ease if need be. He plays with a lot of speed and reckless abandon.

Competing for playing time is sophomore Mata Hola. As a true freshman in 2020, he saw action in 1 game but did not record any stats. He joined the Aggies last summer after returning from serving an LDS Church mission. As a senior at Alta High (UT) in 2016, he racked up 90 tackles, 23.0 tackles-for-loss, 13.5 sacks, 20 QB hurries, 4 pass breakups, 2 forced fumbles, and 1 fumble recovery. As a junior in 2015, he totaled 66 tackles 12.5 tackles-for-loss, 9.5 sacks, 16 QB hurries, 1 pass breakup, and 1 forced fumble. Hola spurned offers from Big-12 member Oklahoma State and Mountain West Conference rival Boise State to sign with the Aggies. Hola is a hard-hitter who excels at getting to opposing quarterbacks. Although he can also drop back into coverage if needed. He doesn’t give up on plays and his speed allows him to cover ground in a hurry. He isn’t afraid to come right at offensive lineman with a bull rush and push them back using his strength.

Adding depth to the position is preferred walk-on sophomore, Addison Trupp. As a redshirt freshman in 2020, he did not see any action. As a true freshman in 2019, he was a late addition to the roster and he ended up redshirting the season. In an injury-shortened season as a senior at East High (UT) in 2018, Trupp logged 33 tackles, 12.5 tackles-for-loss, and a very solid 8.5 sacks. Trupp is the type of player that Coach Anderson loves to bring in and develop. He is a blue-collar type of player that will make a name for himself after playing in one of the premier high school programs in the state of Utah. He is a smart player that does a good job of reading plays as they develop. He gets a good push upfield and rarely takes plays off. He has a good motor and pursues opposing ball carries until the play ends. As he transitions from high school linebacker to collegiate defensive end, he will continue to benefit from being in Paul Jackson’s FBS strength and conditioning program.

Coming Up On Monday: Defensive Tackle