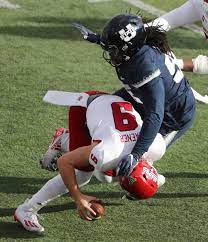 I see two or three players battling for the top two spots at this position throughout fall camp. This could spill into the season and be a week-by-week decision.

The first player expected to impact the defensive line at this position is University of Michigan graduate junior Phil Paea. Paea joins the Aggies in time for the summer strength and conditioning and should have 3 years of eligibility remaining. As a junior at Michigan in 2020, he saw action in 1 game. As a sophomore in 2019, he did not see any action. As a redshirt freshman in 2018, he saw action in 2 games but did not record any stats. As a true freshman in 2017, he spent the season redshirting. Paea is a big, physical and versatile athlete that could play multiple positions on the defensive line. He is a very strong, explosive player. In high school, he played both offensive guard and defensive tackle, and thanks to his wrestling background he has great athleticism. He has been singled out in the past for his amazing work ethic. He has the innate ability to extend his hips and get great leverage and power out of his lower body. He is as strong as you can be with his lower body and that allows him to unlock his hips and play with great force. He has the overall size to be a great run-stuffing defensive tackle.

Challenging for playing time is junior James Hansen. As a sophomore in 2020, he played in 4 games, starting in 1 of them, and logged 9 tackles and 1 QB hurry. Hansen joined the Aggies in time for the winter semester of 2020. After returning from an LDS Church mission, he enrolled at Riverside Community College (CA). As a true freshman in 2019, he logged 25 tackles, 4.0 tackles-for-loss, 2.0 sacks, 1 forced fumble, and 1 pass breakup. Hansen played almost exclusively on the offensive side of the ball in high school but joins the Aggies as a defensive lineman. He is mobile and has shown that he can win his matchups pretty easily. He can show his strength by being able to push back his opponent and gain ground at the line of scrimmage.

Looking to make an impact early in fall camp is junior college transfer junior Aurion Peoples. Peoples joined the Aggies in time to participate in spring ball. As a sophomore at College of the Canyons (CA) in 2020, he tallied 18 tackles, 3.0 tackles-for-loss, and 1.0 sacks. As a true freshman in 2018, he was credited with 19 tackles. Aurion is fast and explosive off the line of scrimmage, laying physical hits as he sheds blockers to stop the run game. He keeps a low center of gravity and is mobile, which allows him to fill in gaps and get to the ball in a hurry. He tackles well in space and is strong enough to fight through double teams. He brings experience coming from the junior college level.

True freshman Johnson Hansen is looking forward to showing what he can do during his first fall camp. After returning from serving an LDS Church mission, Hansen returned in time to join the Aggie in time for spring ball. As a senior at East High (UT) in 2017, he racked up 81 tackles. 14.5 sacks, and 1 interception. As a junior in 2016, he totaled 33 tackles 4.0 sacks, and 1 interception. As a sophomore in 2015, he was credited with 8 tackles,1.0 sacks, and 1 interception. Hansen displays great strength and looks great as an interior defensive lineman. He has really nice speed for someone of his size and doesn’t over-pursue players, which often allows him to be in a good position to make a play. He has a good motor and is often able to chase opposing offensive players down from behind.

Working to make an early impact is true freshman Bo Maile. As a senior at Bingham High (UT) in 2020, he racked up 40 tackles, 2.0 tackles-for-loss, 2.0 sacks, and 2 QB hurries. During an injury-shortened season as a junior in 2019, he logged 9 tackles, 2.0 tackles-for-loss, and 2.0 sacks. Maile is one of the rare high school players in the Aggies class of 2021. He is physical at the line of scrimmage and gets off his blocks quickly. He attacks blockers, running backs, and quarterbacks alike, using his strength to stop the opposition in their tracks. He pounces on ball carriers and wraps them up to complete a big play. He should be able to develop into a productive pass-rusher during his time in college.

Graduate senior Marcus Moore is one of two players that are likely to push for the top two spots at this position. As a senior in 2020, he played in 5 games, starting in 3, and totaling 20 tackles, 2.5 tackles-for-loss, 2.0 sacks, and 1 QB hurry. For his effort, he earned Honorable Mention all-Mountain West honors. Moore joined the Aggies in January of 2020 after graduating from UCLA. Moore spent the 2019 season sitting out with an injury at UCLA. As a sophomore in 2018, he was credited with 3 tackles. He enjoyed his most productive season as a redshirt freshman in 2017, when he tallied 20 tackles, 5.5 tackles-for-loss, 1.0 sack, 1 pass breakup, and 1 forced fumble. Moore is tough to defend with just one player and can win his matchups easily. He plays with a mean streak and hunts down quarterbacks and running backs in the backfield. He is quick off the snap and attacks using great field vision and instincts. He is a physically talented player.

Junior Hale Motu’apuaka is the second player I’ve tabbed to make a big impact in the defensive line rotation. As a sophomore in 2020, he played in all 6 games, starting in 2, and tallied 8 tackles and 1 blocked kick. As a redshirt freshman in 2019, he played in 12 of 13 games and totaled 13 tackles and 0.5 tackles-for-loss. As a true freshman in 2018, he appeared in 2 games but did not record any stats and received a redshirt season. As a senior at Punahou High (HI) in 2017, during an injury-shortened season in which he only played in 6 games, Motu’apuaka logged 25 tackles, 11.0 tackles-for-loss, 3.0 sacks and showed off his versatility offensively by recording 5 carries for 15 yards and 1 reception for another 10 yards. Motu’apuaka is quick off the snap and runs through opposing offensive linemen with relative ease. He can split through double teams to get into the backfield and stop the run. He has great hands and is a fast-twitch defensive lineman. The coaching staff believes he has the potential to play both the defensive end and nose guard position. He has the talent to be an anchor on the defensive line throughout his career.

Challenging to make a move up the depth chart is sophomore Poukesi Vakauta. As a true freshman in 2020, he saw action in 1 game and was credited with 1 tackle and 0.5 tackles-for-loss. As a senior at Trinity High (TX) in 2019, Vakauta racked up 98 tackles, 7.0 tackles-for-loss, 5.0 sacks, 1 forced fumble, and 14 QB hurries. He is from the same high school as former Aggie Tipa Galeai. Vakauta is built as a classic defensive tackle/nose guard. He is very talented in all the defensive line spots. He is strong at the point of attack and with being right around 6 feet tall he can get up under opposing offensive linemen and use his leverage to push the linemen back into the opposing backfield. He plays with a high motor and does not take plays off. He often makes plays just by keeping his head on a swivel and running down opposing offensive players.

Looking to bring some competition to the position is preferred walk-on sophomore Aaron Bredsguard. As a redshirt freshman in 2020, he did not see action in any games. As a true freshman in 2019, he did not see action in any games and spent the season redshirting. As a senior at Viewmont High (UT) in 2018, Bredsguard earned first-team All-Region 5 honors after rolling up 61 tackles, 11.0 tackles-for-loss, 11.0 sacks, 1 pass breakup, and 1 forced fumble. He was a 3-year starter on three consecutive Region 5 championship teams and capped off a stellar high school career with his performance as a senior. Bredsguard has a tremendous motor that enables him to be a dominant edge rusher. He has the size of an interior player but the speed and moves of an outside pass rusher. He goes full speed on every play and is simply too strong for opposing blockers to hold off single-handedly. He reads plays well and usually can blow them up at the line of scrimmage.

Pushing to see the field early is true freshman return missionary Seni Tuiaki. Tuiaki joined the Aggies in time for spring ball following his return from serving an LDS Church mission. As a senior at East High (UT) in 2017, he logged 24 tackles and 1.0 sacks, while also starting on the offensive line. As a junior in 2016, he was a starter on a very talented offensive line and was credited with 2 tackles and 1.0 sacks defensively. After adding some weight, Tuiaki looks like he will fit nicely as a defensive tackle. He did play on both sides of the ball in high school at a high level. That level of experience will help him diagnose opposing plays. He’s extremely aggressive and doesn’t give up on plays. He is determined to do something on each snap that will benefit the team. He is good with his hands and he is also physically strong.

Coming up on Tuesday: Safety