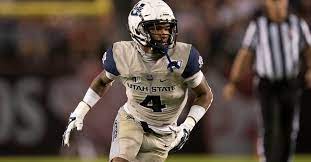 Challenging for the top spot on the depth chart is senior Jarrod Green. As a junior in 2020, he played in 4 games, starting in 1 and recorded 6 tackles. As a sophomore in 2019, he saw action in all 13 games and was credited with 2 tackles. As a redshirt freshman in 2018, he played in 11 games, primarily on special teams, and made 4 tackles. He spent the 2017 season as a redshirt. As a prep senior at Consumnes High (CA) in 2016, Green earned Capital Valley Conference first-team honors and second-team All-Metro, as he totaled 53 tackles, 3.0 tackles-for-loss, 2 interceptions, returning one for a touchdown, 3 pass breakups, 1 forced fumble, and 1 fumble recovery. Green possesses good feet and length for a defensive back and he is very skilled at flipping his hips and breaking on passes, which is essential for a great cornerback. He is developing into an explosive, competitive player who possesses good ball skills.

Also making a strong push for the starting nod is junior Dominic Tatum. As a sophomore in 2020, he played in all 6 games, starting in 2 and making 19 tackles, 0.5 tackles-for-loss, and 2 pass breakups. As a true freshman in 2019, he played in 5 games and was credited with 3 tackles and 2 pass breakups. As a senior at Culver City High (CA) in 2018, Tatum racked up 94 tackles, 2 interceptions, 7 pass breakups, and 2 fumble recoveries. Tatum’s father JerRon was an Aggie wide receiver in the early 2000s. Tatum spurned offers from several Mountain West programs including Boise State, Colorado State, Fresno State, Nevada, New Mexico, San Diego State, UNLV, and an offer from the former Aggie coaching staff at BIG 12 program Texas Tech. Tatum is a hard worker with a great football IQ. He is a defensive back with nice size and he makes the most of it in coverage to counter bigger receivers while covering large parts of the field with his speed. He moves very fluidly on tape, whether he’s moving forward, backward, or sideways, he looks very smooth running around the field. He is a very athletic, versatile player who is capable of playing any position in the defensive backfield.

Joining the Aggies just a few weeks ago is senior Monte (Tay) McGary. McGary joins the Aggies this summer after previously playing at Troy University. He should have two years of eligibility remaining. As a redshirt junior at Troy University in 2020, he did play in any games. As a junior in 2019, he missed the season with an injury and received a medical redshirt. As a sophomore at Iowa Western Community College (IA), he played in 11 games and logged 24 tackles and 1 fumble recovery. As a redshirt freshman at South Dakota State in 2017, he played in all 16 games and was credited with 16 tackles and 1 pass breakup. As a true freshman in 2016, he redshirted at South Dakota State. McGary is a physical specimen and can play multiple spots in the secondary. He is still fairly new on the defensive side of the ball. He began his collegiate career as a wide receiver. That experience should help him with route recognition and tendencies. He likes to use his excellent size of 6-2 to his advantage. He can play in space in zone coverage or man-to-man.

Looking to compete for playing time will be sophomore Keith Harris. As a redshirt freshman in 2020, he did not see any action. As a true freshman in 2019, Harris spent the season redshirting. Although at press time I was not able to locate any stats for Harris’ senior season at Leuzinger High (CA) in 2018, Harris did earn a first-team All-Bay League nod. As a junior in 2017, Harris had 26 tackles, 1.0 sacks, 2 interceptions, and 3 pass breakups. Harris was a jack-of-all-trades player in high school playing cornerback, wide receiver, and a dual-threat running quarterback. He is aggressive and packs a hard hit when tackling. He is a nice athlete who can recover when getting beat off moves and finds a way to jump in front of passes to pick them off. He can also make an impact in the return game where he can use his speed in the open field to be electric. He will have a bit of a learning curve ahead of him as he spent a lot of time on the offensive side of the ball in high school.

Working to make a splash in his first fall camp is true freshman Isaac (Ike) Larsen. As a senior at Sky View High (UT) in 2020, he totaled 36 tackles and 3 interceptions defensively, as well as 18 receptions for 456 yards 2 touchdowns and 7 carries for 71 yards and 2 touchdowns offensively. For his effort, he earned all-state and all-region honors to along with winning the Utah 4-A state title. As a junior at Logan High (UT) in 2019, he racked up 62 tackles, 1.0 tackles-for-loss, 7 interceptions, 1 touchdown, 7 pass breakups, 3 forced fumbles, 2 fumble recoveries, and another touchdown defensively, while adding 35 receptions for 548 yards and 6 touchdowns as a wide receiver. As a sophomore in 2018, he tallied 42 tackles, 5 interceptions, 1 forced fumble, 1 fumble recovery, and another touchdown. Isaac is a talented high school player coming to the Aggies. He is an athletic two-way player who makes big plays on both sides of the ball. He analyzes plays quickly and flocks to the ball in a hurry. He is a big-hitter in the open field and comes in and out of his backpedal smoothly. His time as a wide receiver will be an advantage for him. He also has a ball hawk mentality and a physical nature. Although he may still need to adjust to the college level, Isaac should develop into a good player in college.

Returning to his starting role in 2021 will be graduate senior Shaq Bond. As a senior in 2020, he started in all 6 games and was second on the team in tackles with 47, while also collecting 6.0 tackles-for-loss, 1 interception, and 3 pass breakups. For his effort, he earned Honorable Mention all-Mountain West honors. As a junior in 2019, he started in all 13 games and racked up 83 tackles, 3.5 tackles-for-loss, 3 interceptions, 5 pass breakups, and 1 forced fumble. For his effort, he earned an honorable mention all-conference nod from the Mountain West Conference. Following the conclusion of the season, he was also voted the Comeback Player of the Year by his teammates. As a sophomore in 2018, he played in 8 games, starting in all 8 of them. He had his season cut short due to an injury. Before the injury, he totaled 37 tackles, 3.0 tackles-for-loss, 6 pass breakups, and 1 interception which he returned 100 yards for a touchdown. As a freshman wide receiver at Southwestern Community College (CA) in 2017, he had recorded just 1 reception for 3 yards. The Southwestern coaching staff then moved him to safety and over the final 6 games of the season and he racked up 36 tackles, 1.0 tackle-for-loss, an astounding 8 interceptions, and 5 pass breakups. He also 3 blocked kicks. Bond is a very hard-working player. He has quiet confidence that translates well to his teammates. He has a ton of passion and energy for the game of football. He is very athletic and that allows him to be a sideline-to-sideline playmaker. He is a very intelligent player. He can play both safety and cornerback.

Junior Ajani (AJ) Carter has a very good chance of stepping up and snatching some playing time. As a sophomore in 2020, he played in 5 games and was credited with 7 tackles. As a true freshman in 2019, he saw action primarily on the special teams’ units in 12 of 13 games and was credited with catching 1 pass for 11 yards and 8 tackles on special teams. As a senior at North Shore High (TX) in 2018, he pulled in 33 receptions for 495 yards and 7 touchdowns. Following the 2018 season, he was a first-team all-district performer but will always be remembered as the player who caught the Hail Mary pass to win the most epic state championship game in Texas football history. As a junior in 2017, after transferring to North Shore, he had 6 receptions for 49 yards and 1 touchdown. Don’t let the lack of high school production fool you, Carter is coming from one of the talent-rich high school programs in the State of Texas. He has a prototypical size for safety. He is good at using his time as a wide receiver to help him read and react to plays as they unfold in front of him. He is very aggressive and likes to use his size to be physical in both run and pass defense. He has good speed and that allows him to make a minor mistake and still be able to make up for it.

Competing to work his way up the depth chart is University of Michigan junior transfer, Hunter Reynolds. He joins the Aggies after spending the first four seasons of his career at Michigan. He should have two seasons of eligibility remaining. As a junior at Michigan in 2020, he played in all 6 games and totaled 16 tackles and 1.0 tackles-for-loss. As a sophomore in 2019, he saw action in 12 games and was credited with 5 tackles and 1.0 tackles-for-loss. As a redshirt in 2018, he saw action in 1 game and logged 1 tackle. He was also named Co-Defensive Scout Team Player of the Year. As a true freshman in 2017, he spent the season redshirting. Reynolds is another defensive back that should be able to draw a lot of read and recognition of the opposing offenses thanks to his time as a wide receiver. He is good at working the opposing quarterback with his eyes and baiting throws in his direction. He has good ball skills once the ball is in the air. He enjoys making the big hit and he does not shy away from contact. He is versatile enough that he could potentially play several different spots in the secondary.

Hoping to make an early impact is sophomore Luke Marion. As a true freshman in 2020, he played in 3 games, starting in 1, and logged 3 tackles, 1 interception, and 1 pass breakup. As a senior at Tualatin High (OR) in 2019, Marion earned Oregon Class 6-A first-team all-Three Rivers League honors at defensive back. As a junior in 2018, he earned second-team all-league honors at defensive back. His father is 12 NFL Pro Bowl veteran Brock Marion. Marion is an extremely physical safety who isn’t afraid of laying a big hit. He runs all over the field and can cover quite a lot of ground. He is at his best coming in on the play, whether it’s in run support or coming to tackle an underneath receiver. He diagnoses the play well and shades over into a position to give him an advantage. He is blessed with a high football IQ.

Looking to contribute will be sophomore Crew Wakley. As a true freshman in 2020, he did not see any action. Wakley joined the Aggies in time for the 2020 season following serving an LDS Church mission. He will be making the transition to the defensive side of the ball after playing quarterback in high school. As a senior at Jordan High (UT) in 2017, Wakley racked up 191 completions in 329 attempts for 3,009 yards, 22 touchdowns, and 8 interceptions. He also rumbled for 178 carries and 1,422 and 21 touchdowns. He put up equally impressive numbers as a junior in 2016, as he amassed 180 completions in 292 attempts for 3,507 yards, 38 touchdowns, and 7 interceptions. He again took off for 195 carries for 1,420 yards and 22 touchdowns. Wakley has clearly shown that he is very athletic. He is gifted in the read-option offense, with the legs to make big plays against defenses. Once he takes off on the run, he is not afraid of contact and is willing to take on an opposing defender. That physicality should translate nicely over to the defensive side of the ball. He is at his best on the run, making plays with his feet and reading and reacting, that trait should allow him to excel at several defensive positions.

Coming Up On Wednesday: Cornerback