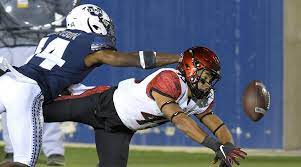 I think that senior Zahodri Jackson gets the first shot at the top spot on the depth chart. As a junior in 2020, he played in 5 games, starting in 4, and rolling up 20 tackles, 2 pass breakups, and 1 QB hurry. As a sophomore in 2019, he battled an injury for much of the season and that limited him to playing in only 4 games, he did start the season opener. Due to the injury, he was credited with 5 tackles and 1 pass breakup. As a redshirt freshman in 2018, he played in all 13 games and started in 1 of them, while being credited with 6 tackles. As a true freshman in 2017, he spent the season as a redshirt. As a prep senior at Riverview High (FL) in 2016, Jackson earned Florida Class 8-A District 6 All-Area honors after finishing his with 45 tackles, 5.0 tackles-for-loss, 15 pass breakups, 2 interceptions, 1 forced fumble, and 1 fumble recovery. Jackson is starting to develop into a physical and explosive defensive back that plays with great aggression. He loves contact and isn’t shy about getting ups and pushing opposing wide receivers around. He is a confident defensive back that possesses great speed and good footwork. He has the versatility to excel in both man-to-man coverages or drop back into a zone.

I see senior Andre Grayson getting his fair share of playing time in 2021. As a junior in 2020, he played in 4 games, starting in 3, and was credited with 10 tackles. As a sophomore in 2019, he played in all 13 games and received 7 starts, while rolling up 47 tackles, 2.0 tackles for loss, 1.0 sack, 1 interception, 6 pass breakups, and 2 forced fumbles. As a redshirt freshman in 2018, he played in 12 games and was credited with 4 tackles and 2 pass breakups. As a true freshman in 2017, he sat out the season as a redshirt. As a prep senior at Etiwanda High (CA) in 2016, Grayson earned a second-team All-Baseline League selection after tallying 48 tackles, 3.0 tackles-for-loss, 4 interceptions, 6 pass breakups, 1 forced fumble, and 1 fumble recovery. Grayson has great hands. He has developed into a quick defensive back with good ball skills. He also has a high football IQ. His quick reaction and fluid hip movement make him an ideal player to cover the opposing team’s slot receiver. He has made huge strides during his career at Utah State thanks to an incredible work ethic.

Competing to make a move up the depth chart is senior Xavion Steele. As a junior in 2020, he played in all 6 games, starting in 1, and logged 2 tackles. As a junior college transfer, he joined the Aggies in time for the 2020 winter semester. As a sophomore in 2019, at Fullerton Community College (CA), Steele racked up 59 tackles, 7.0 tackles-for-loss, 0.5 sacks, 2 interceptions, and 15 pass breakups. For his efforts, he was named Junior College Defensive Back of the Year by Gridironrr.com. As a true freshman in 2018, he tallied 48 tackles, 1.5 tackles-for-loss, 4 interceptions, returning 2 for touchdowns, 7 pass breakups, and 1 blocked kick. Steele is a natural ball-hawk and possesses blazing speed as he sprints down the field after an interception. He can make up for a misstep or mistake by closing on the ball well. His speed allows him to get into a position to make a play and his ability to track the ball in the air helps him make good use of it.

Looking to move up the depth chart will be junior Mike Anyanwu. As a sophomore in 2020, he played in all 6 games, earning 1 start, and recording 3 tackles. As a redshirt freshman in 2019, Anyanwu saw action in 5 games and made 1 tackle. He was forced to redshirt the 2018 season after suffering an injury in fall camp that caused him to miss the entire season. As a senior in 2017 at Charter Oak High (CA), Anyanwu had a standout season earning first-team All-Area honors after pulling in 32 tackles, 1.0 tackle-for-loss, a whopping 10 interceptions, and 11 pass breakups. Anyanwu is a very athletic football player that possesses good feet and which allows him to play well in coverage. He has solid lower body strength and agility that allows him to get in and out of breaks quickly. He is quick and athletic enough to recover on plays nicely and should develop into a very solid cover corner.

Junior Cam Lampkin is looking to build on a successful first two seasons at Utah State. As a sophomore in 2020, he played in all 6 games, starting 4 of them, and totaling 20 tackles, 2.0 tackles-for-loss, 1.0 sacks, and 2 pass breakups. As a true freshman in 2019, he played in all 13 games and received 2 starts, while logging 9 tackles, 1 interception, and 2 pass breakups. As a senior at a very talent-loaded Poteet High (TX) in 2018, Lampkin played primarily on the offensive side of the ball and snagged 26 receptions for 608 yards and 6 touchdowns. As a junior in 2017, Lampkin also snagged 26 receptions for 493 yards and 3 touchdowns. Lampkin is an all-purpose player as he started at wide receiver, cornerback, and even at quarterback. Thanks to his time on the offensive side of the ball, he is very good at reading opposing offensive sets. He has break-away speed that allows him to run with ease. He is a very physical defensive back and is accustomed to playing man-to-man coverage. He is not afraid to go up and battle with an opposing player to come down with the football.

Battling for playing time is graduate senior Terin Adams. As a graduate senior in 2020, Adams chose to sit out the season due to covid. He joined the Aggies a couple of weeks into fall camp in 2019 after leaving Arizona State once he fulfilled his graduate requirements. As a graduate transfer in 2019, he was limited by an injury but he did rebound to play in 9 games and record 9 tackles. As a redshirt sophomore at Arizona State in 2018, he rolled up 30 tackles, 3.0 tackles-for-loss, and 1 pass breakup. Before joining Arizona State, Adams was a standout player at the City College of San Francisco. Adams has shown the versatility to play all over the secondary as well as contribute on special teams. He has elite speed and that makes him a dangerous cover corner. He has fluid hips and that allows him to get in and out of breaks with ease. He primarily played man-to-man defense at his last collegiate stop and that allows him to step into the Utah State scheme seamlessly. He has very good ball skills and his physical nature allows him to bully opposing wide receivers.

Hoping to make some noise in his first fall camp is true freshman Shawn Gates. Gates joined the Aggies this summer after initially signing with ACC school Boston College in December. He subsequently changed his mind and has landed in Logan. During a Covid shortened senior season at East High (OH) in 2020, he tallied 11 tackles, 2.0 tackles-for-loss, and 1 interception. During an injury-shortened junior season in 2019, he managed to record 1 carry for 37 yards, and 1 reception for 27 yards, and 1 touchdown. Gates has a compact, well-developed frame with room to add muscle mass to the upper body. He has natural ball skills down the field. He runs well overall with a lower-body explosion. He times his jumps well, and he has a nose for the football. His overall ability to diagnose and react can improve over time, but he makes plays when it counts. He possesses requisite ball skills and offers quality run support. As he adds weight to his frame, he should improve his physicality and improve his overall skillset.

Adding depth to the position is junior Jaden Smith. As a redshirt sophomore in 2020, he did not see any action. As a sophomore in 2019, he spent the season redshirting per NCAA transfer rules. As a true freshman at Incarnate Word University in 2018, he played in 11 games, with 1 start, and recorded 10 tackles, 1.0 tackles-for-loss, and 1 QB hurry. Throughout his high school career, he served as a dynamic punt and kick returner. He also saw time as a running back and receiver on the offensive end while playing significant snaps in the defensive backfield. Smith has solid speed and deceptive versatility. He isn’t afraid to mix it up with bigger receivers.

Coming Up On Thursday: Special Teams