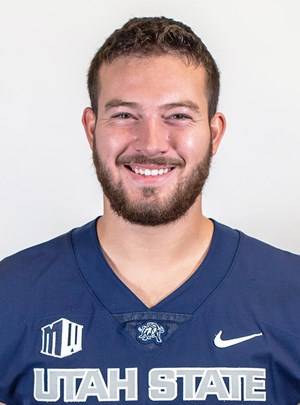 My offensive game ball is going to go to the members of an Aggie offensive line that featured two first time starters. Senior left tackle Al Edwards, graduate senior left guard Demytrick Ali’ifua, junior right tackle Jacob South, junior right guard Quazzy White and the combination of senior Chandler Dolphin and sophomore Falepule Alo at center. This group allowed no sacks and only two tackles-for-loss on the night, en route to paving the way for the Aggie running game to rack up 222 yards and 1 touchdown and holding strong at the line of scrimmage while the Aggie quarterbacks passed for 219 yards and 1 touchdown.

My defensive game ball goes to the duo of graduate senior defensive end Jaylin Bannerman and junior defensive end Patrick Joyner. In his first start as an Aggie Patrick Joyner had 3 tackles, 1.0 sack, 2.0 tackles-for-loss, and recorded a safety. Jaylin Bannerman saw what had been perhaps his largest amount of playing time in an Aggie uniform and he made it count as he made 3 tackles, 1.0 sack, 2.5 tackles-for-loss, and 1 QB hurry.

My special teams game ball goes to graduate senior kicker Connor Coles. Connor nailed all 3 of his field goal attempts, making kicks from 23, 28, and 39 yards. He also connected on his lone PAT try of the night. For his perfect effort, Connor was named the Mountain West Conference Special Teams Player of the Week.