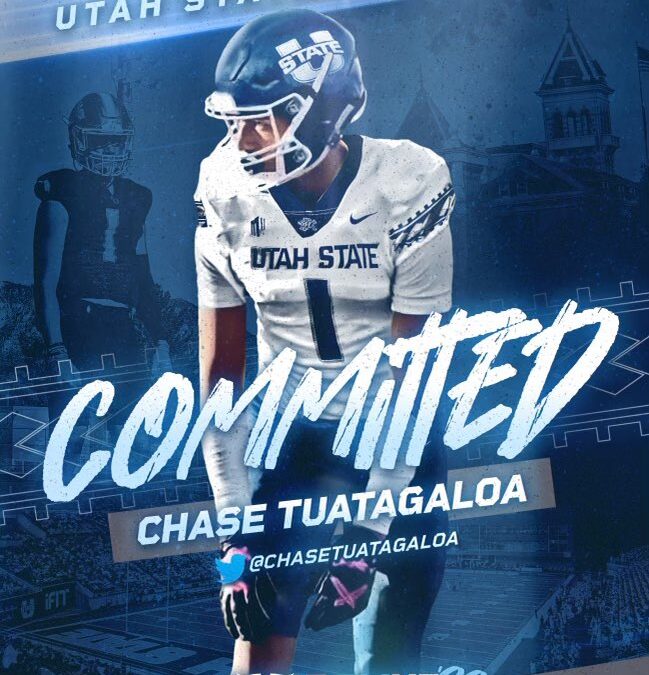 There were so many HUGE week five performances that I am having a tough time making a decision on which ones to include. Because so many of them played so well, I can’t omit these guys. It’s great to see future Aggies doing so many great things on and off the field.

My offensive recruit of the week is going to be a trio this week.

My first recruit of the week once again will go to Spring High (TX) quarterback Bishop Davenport. Bishop continues to put up video game numbers week in and week out. In a 69-21 blowout win over Trumball Memorial (TX), Bishop completed 22 of 29 passes for 388 yards and 5 touchdowns. On the ground he turned 9 carries into 114 yards and 2 more touchdowns.

My second recruit of the week will go to Orem High (UT) quarterback Chase Tuatagaloa. In a tough loss 42-53 loss to Desert Pines High (NV), Chase completed 22 of 44 passes for 415 yards, 4 touchdowns, and 2 interceptions. He also added 4 carries for 28 yards.

My third and final offensive recruit of the week goes Bellville High running back Robert Briggs. In a solid 48-26 win over Stafford High (TX), Robert amassed 162 rushing yards and 2 touchdowns on just 10 carries. Robert also added 1 reception for 19 yards and another touchdown.

I’m also going to go with a pair of Texas boys as the defensive recruits of the week.

First up is Mesquite High (TX) linebacker Josh Williams. In a 21-14 win over Grand Prairie High (TX), Josh racked up 9 tackles, 3.0 tackles-for-loss, and 2.0 sacks. He also added a punt block that he scooped up and returned for a touchdown.

My second choice for defensive recruit of the week goes to Trinity Christian (TX) defensive end Matt Freeman. In a tough 48-0 loss to Cornerstone Christian (TX), Matt was one of the lone bright spots, as he rolled up 10 tackles, 2.0 tackles-for-loss, and 1 pass breakup.

This week I also have to add a rare two-way recruit of the week and that will go to Northridge High (UT) quarterback/linebacker Lofa Fonoti-Maikui. In a 37-27 win over Box Elder High (UT), Lofa led the Knights at quarterback by completing 14 of 26 passes for 303 yards and 2 touchdowns, while also tacking on 7 carries for 62 yards and 2 more touchdowns. As a linebacker on defense Lofa led the way for the Knights after being credited 12 tackles.