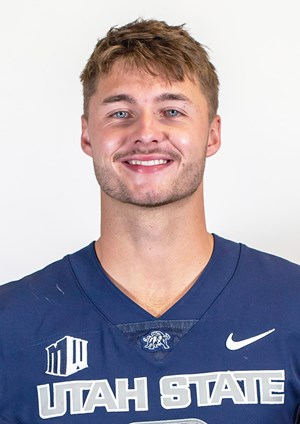 After a gutsy offensive performance that saw multiple players step up time and time again, I’m forced to hand out three offensive game balls this week.

The first game ball has to go to junior quarterback Andy Peasley. After starter Logan Bonner left the game with an injury, Andy came in off the bench and delivered big time completing 10 of 15 passes for 195 yards and 3 touchdowns, while adding 29 more yards on 5 carries and he tacked on a 2-point conversion for good measure.

The second and third game balls will once again go to the dynamic receiving duo of graduate senior Brandon Bowling and senior Deven Thompkins.

Deven led the way for the Aggies after hauling in 9 passes for 188 yards and 1 touchdown. Deven’s night was highlighted by a 72 yard touchdown reception early in the fourth quarter.

Not to be out done, Brandon snared 9 passes of his own for 136 yards and 2 touchdowns. Brandon had a big 37 yard touchdown catch late in the third quarter.

My defensive game ball MUST once again go to graduate senior linebacker Justin Rice. To say that his defensive performance Saturday night was just huge would be an understatement. Justin racked up 14 tackles, 2.5 tackles-for-loss, a drive stopping interception at the goal line, and a game saving forced fumble that was recovered by Aggie defender Monte McGary that allowed the Utah State offense to run out the remaining time on the clock to secure the Aggie victory. For his effort Justin was named the Mountain West Conference Defensive Player of the Week for the second straight week.

My special teams game ball will go to sophomore punter Stephen Kotsanlee. Stephen was solid Saturday night, booting 3 punts for an average of 45.7 yards per punt, with a long of 48 yards with 1 touchback.