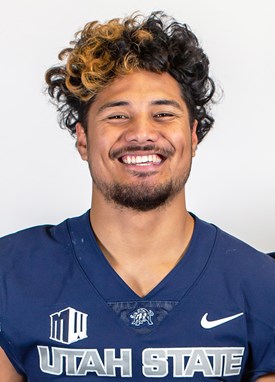 My first game ball is a clear cut choice as it is going to junior quarterback Logan Bonner. In the 51-31 win over Hawaii, Logan was a man on fire completing 21 of his 30 passes for 361 yards and 4 touchdowns. He connected on touchdown passes of 45 yards to Justin McGriff, 46 yards to Derek Wright, 21 yards to Carson Terrell, and 14 yards to Brandon Bowling.

My second game ball is going to sophomore running back Elelyon Noa. Elelyon set the pace for the Aggies on the ground rumbling for a career high 22 carries for another career high 111 yards and a 3-yard touchdown run for the first Utah State score of the game.

My defensive game ball is going to go to a first time recipient, junior defensive end Byron Vaughns. Byron made a huge impact as an edge rush end Saturday afternoon as he racked up 4 tackles, which included 3.0 tackles-for-loss, 2.0 sacks, 1 forced fumble and 1 tipped pass attempt that was intercepted by Aggie stryker Cash Gilliam in the end zone to put a stop to a Hawaii drive.

My first game ball is going to go to graduate senior kicker Connor Coles. Connor was money for the Aggies all afternoon as he hit all 3 of his field goal attempts. He connected on tries from 40 yards, 22 yards, and once again from 22 yards out. He also went perfect on his PAT attempts finishing a perfect 6-of-6.

My second game ball HAS to go to graduate senior wide receiver Brandon Bowling. With the balance of the game still in doubt, Hawaii attempted an on-side kick that Brandon plucked out of the air as the ball popped into the air and he raced 45 yards to the end zone for a huge momentum turning touchdown.