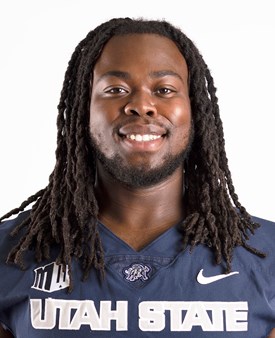 For my first offensive game ball I HAVE to start with the incredible performance senior wide receiver Deven Thompkins put on. In the Aggies 35-13 win over New Mexico State, Deven hauled in 9 passes for a career high 215 yards and 2 touchdowns. For his effort last week he was once again named the Mountain West Conference Offensive Player of the Week. Deven is now creeping towards the single-season receiving yardage record at Utah State.

I’m going to hand out a trio of defensive game ball awards this week.

My first defensive game ball will go to graduate senior safety Shaq Bond. During the Aggies 35-13 win over New Mexico State, Shaq led the Aggie defense in tackles with 9, while also turning in 1.0 tackles-for-loss, 1.0 sacks and 2 pass breakups.

My third and final game ball will be going to graduate senior defensive tackle Marcus Moore. Marcus made a living in the backfield during the Aggie win, racking up 4 tackles, 3.0 tackles-for-loss, and 1 QB hurry.

My special teams game ball is going to sophomore punter Stephen Kotsanlee. Stephen did a tremendous job of flipping the field for the Aggies, as he booted his two punts 53 and 51 yards, which was good enough for an average of 52.0 yards per punt on the afternoon.