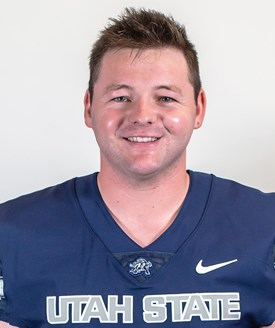 My offensive game ball is going out to graduate junior quarterback Logan Bonner. In the Aggies huge 48-17 road win over the Spartans, Logan completed 20 of his 33 passes for 263 yards and 4 touchdowns with 1 interception and 1 lost fumble. He spread the ball around to 8 different receivers and led the Aggies on a 48-3 run after they fell behind 14-0 early in the game.

My defensive game ball is going to go to junior striker Ajani (AJ) Carter. AJ had a breakout game amassing a full stat line that includes 4 tackles, 1.0 tackles-for-loss, 1.0 sack, 1 forced fumble, 1 fumble recovery, 1 pass breakup, and he also picked off a pass that he returned 45 yards.