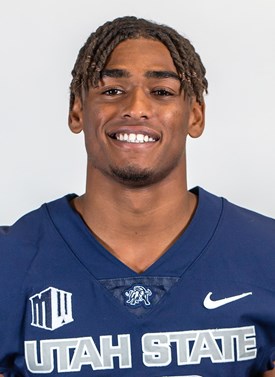 My first offensive game ball has to go to sophomore quarterback Cooper Legas. Cooper came off the bench early in the 2nd quarter to replace injured starter Logan Bonner and all he did was complete 11 of 20 passes for 171 yards, 2 huge touchdowns and 1 interception. More importantly, in just the second actual game action of his career, Cooper showed poise and command of the offense and they responded to his leadership.

My second offensive game ball will go to senior wide receiver Deven Thompkins. Deven capped off one of the best receiving seasons in Utah State Football history by hauling in 6 passes for 115 yards including one that went 62 yards for a touchdown.

My third offensive game ball must go to junior running back Calvin Tyler Jr. Calvin enjoyed sweet revenge against his former team by toting the rock a career high 26 times for 120 yards and 1 touchdown. He posted a stout average of 4.6 yards per carry.

My defensive game ball definitely have to go to a pair of seniors playing in the final collegiate game.

My second defensive game ball must go to graduate senior linebacker Justin Rice. Justin did what he has done all season long, just make HUGE plays. Once the dust settled on the Aggie win, Justin had totaled 9 tackles and 1 BIG forced fumble that fellow linebacker AJ Vongphachanh gobbled up to stop a fourth quarter Oregon State drive near mid-field.

My special teams game ball will be going to sophomore punter Stephen Kotsanlee. Kotsanlee delivered with his punts all night booting 4 of them for an average of 41.0 yards per punt. He also landed 2 kicks inside the 20-yard line, including one that was downed by Jaden Smith at the 3-yard line. He also had one punt of 50+ yards.