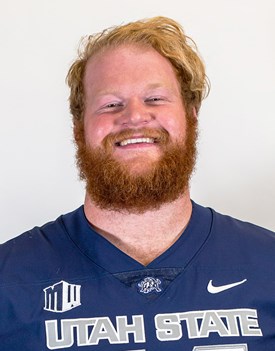 In 2021, Chandler played in 12 games and was the starter in 11 of those games. Dolphin is the kind of raw, athletic, unheralded talent that Utah State has thrived on developing into solid offensive linemen over the last decade. He is a student of the game and is very cerebral. He is a versatile player that can play both guard and center. He plays with aggression as he attacks an opposing player creating holes for Aggie running backs to run up the middle of the field. He has solid footwork and is an asset in pass protection. His snaps are on point and are rarely misfired.

In 2021, Pule saw action in 5 games and started 3 of those games before an injury cut his season short. Alo is a monster up front on the offensive line. He does a good job of gaining leverage on an opposing defensive lineman and driving him from the line of scrimmage. He has definitely been the beneficiary of getting into a collegiate strength and conditioning program, as well as having the opportunity to learn from what is becoming a veteran Utah State offensive line. He plays angry and does a good standing his ground in pass protection. His snaps are clean and make their way back to the quarterback with ease.