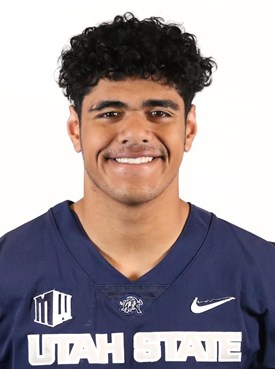 NyNy spent the 2021 season redshirting. Davis is very dangerous out in the slot. Once the ball is in his hands, he displays shifty footwork and can get himself out into the open field where his speed and ability to make tacklers miss take over naturally. He excels in the short passing game, turning easy catches into explosive plays with his legs. He can also stretch the field on deep throws as he gets behind the secondary with little issue. He is one of those guys that I like to say can “make guys miss in a phone booth.” He is dangerous on the jet sweep and his good field vision enables him to find a seam and get upfield for positive yardage. Davis has the potential to be electric for Utah State during his career.

In 2021, Jamie saw action in 11 games primarily on special teams. Nance has exceptional speed and quickness. He is not just a straight-line guy, as he shows twitch and change of direction in his route-running. Opposing defenses have to be aware of where he is at all times. He has solid ball tracking skills and good hands. He can be a true playmaker who can play outside or in the slot. He is a kid who could play early because of his speed. I believe his long-term projection is good because he can really challenge opposing defenses and be a big-play guy for the Aggie offense.

As a senior at Thunder Ridge High (ID) in 2021, Paul racked up 31 tackles, 16.0 tackles-for-loss, 7.5 sacks, 1 pass break up, 4 forced fumbles, and 2 punt blocks. Paul is a high-motor player who can generate a consistent pass rush for his team. He has a variety of pass-rushing moves which enables him to get in the backfield quickly. He sheds blocks quickly and is a sure tackler when wrapping up the quarterback. At just 17 years old he already has the physique of a much older player and has all the physical tools to be an effective pass-rusher in college.

Enoka joined the Aggies just in time for fall camp last season and he spent the 2021 season redshirting. Migao is perfect for the EDGE rush position and his really relies on his finesse and speed. He is developing a lethal bull rush and will give opposing offenses fits for years. He has a muscular frame but also has great game speed to pair with it. He is at his best when he is tracking down opposing quarterbacks. He makes a concentrated effort to get a hand on the ball carrier to disrupt the play. He sheds his blocks easily and takes good angles to get into the backfield. He has lots of potential and will start to shine as he continues to develop.

Seni saw action in 1 game during the 2021 season and redshirted. Tuiaki did play on both sides of the ball in high school at a very high level. That level of experience will now help him diagnose opposing plays as a defensive player. He is determined to do something on each snap that will benefit the team. He is good with his hands and he is also physically strong. He is very agile and light on his feet for a player of his size. He’s extremely aggressive and doesn’t give up on plays. He plays with a violence that coaches love.

Shawn spent the 2021 season redshirting. Gates has a compact, well-developed frame with room to add muscle mass to his upper body. He has natural ball skills down the field. He runs well overall with a lower-body explosion. He has the length that defensive coaches covet. He times his jumps well, and he has a nose for the football. His overall ability to diagnose and react can improve over time, but he makes plays when it counts. He possesses requisite ball skills and offers quality run support. As he adds weight to his frame, he should improve his physicality and improve his overall skillset.