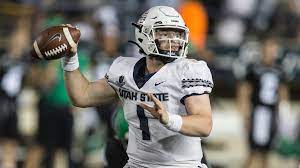 Junior Cooper Legas had a very impressive spring ball session after seeing the majority of the first-team snaps with Logan Bonner missing all of spring camp. As a sophomore in 2021, Legas only saw action in one game, but MAN did he make it count! Legas checked into the LA Bowl versus Oregon State mid-way through the second quarter and immediately dropped a perfectly thrown deep ball to wide receiver Deven Thompkins for a 62-yard touchdown pass on his FIRST career attempt. He finished the game completing 11 of his 20 passes (55.0%) for 171 yards, 2 touchdowns, and an interception. He also logged 8 carries for -14 yards and even chipped in 1 reception for 34 yards. As a redshirt freshman in 2020, Legas did not see any action. He sat out the 2019 season as a true freshman while he redshirted. Legas was a man among boys his last two seasons at Orem High (UT). As a senior in 2018, he racked up 237 completions in 340 attempts (69.7%) for a whopping 4,338 yards, 48 touchdowns, and 11 interceptions. He also rushed for 1,077 yards on just 93 carries for another 15 touchdowns. For his effort, he was named 4-A Offensive MVP, 4-A first-team all-state, Utah Valley Player of the Year, and Region 10 Offensive MVP. All of his work culminated in a second straight 4-A Utah State Championship. As a junior in 2017, he began to shine, as he had 241 completions in 364 attempts (66.2%) for 4,115 yards, 45 touchdowns, and 9 interceptions. He also took off for 113 carries, 1,076 yards, and 7 touchdowns. The night former Aggie Head Coach Gary Andersen was once again officially named the Head Coach, he made phone calls to two recruits. One of those calls was to Legas. The Aggies had to fight off a last-minute charge from SEC member the University of Arkansas to secure the services of Legas on signing day. He is shifty as a runner and makes cuts upfield well, making him difficult to bring down. He is a true dual-threat quarterback and a playmaker. He can extend plays with his legs and has a strong arm to make any throw needed in the pocket or on the run. He is a natural leader at the quarterback position and commands the huddle. He has a great understanding of his pre-snap reads and responsibilities and makes on-field decisions accordingly.

Pushing hard throughout spring ball is sophomore transfer, Levi Williams. Williams joined the Aggies in January after spending the first three seasons of his career at the University of Wyoming. He has three years of eligibility remaining. During the 2021 season, Williams played in 9 games as a sophomore while at Wyoming, completing 63 passes in 109 attempts (57.8%) for 863 yards, 5 touchdowns, and 8 interceptions. He also recorded 56 carries for 282 yards and a touchdown. He had his own breakout bowl game during the 2021 season. In a 52-38 win over Kent State in the Idaho Potato Bowl, he ran for a career-high 200 yards and 4 touchdowns, while also completing 9 of 11 passes for 127 yards and another touchdown. As a redshirt freshman in 2020, he started in 5 of 6 games and passed for 59 completions in 119 attempts (49.6%) for 877 yards, a touchdown, and 3 interceptions. He also chipped in 56 carries for 100 yards and 6 more touchdowns. As a true freshman in 2019, he was used in 3 games while maintaining his redshirt status and completed 19 passes in 39 attempts (48.7%) for 343 yards, 3 touchdowns, and 2 interceptions. He also logged 40 carries for 181 yards and a touchdown. Williams appears extremely comfortable in the pocket going through his progressions. He is confident in his arm strength and his ability to make throws, even in tight windows. He makes strong accurate throws and can play out of shot-gu or play-action. He uses his mobility well to throw on the move. He has proven he can take off and run it himself when the situation arises. He is very athletic for his size. His familiarity with the Aggie offense will make his transition to Logan a smooth one.

Bishop Davenport enters fall camp as one of two true freshman scholarship quarterbacks on this year’s roster. As a high school senior at Spring High (TX) in 2021, Davenport amassed 234 completions in 342 attempts (68.4%) for 3,807 yards, 41 touchdowns, and 10 interceptions. He also showed he can run as he took 114 carries for 766 yards and 7 touchdowns. As a junior in 2020, he racked up 234 completions in 336 attempts (69.6%) for 3,459 yards, 36 touchdowns, and just 3 interceptions. He also had 97 carries for 680 yards and 7 touchdowns. As a sophomore in 2019, he saw a little varsity action logging 18 completions in 36 attempts (50.0%) for 167 yards and 2 interceptions. He added 21 carries for 221 yards and 2 touchdowns. Davenport is comfortable in an up-tempo offense such as Utah State’s. He has a strong arm with an easy throwing motion. He goes through his progressions and steps into his passes to make an accurate throw. He is a leader and a winner and he performed very well at the highest level of high school football in Texas. He is very mobile as and throws with accuracy while on the run. He is also very capable of tucking the ball and running to gain chunk yardage. Davenport has established himself as a true dual-threat quarterback.

Chase Tuatagaloa enters fall camp as the second of two true freshman scholarship quarterbacks. As a senior at Orem High (UT) in 2021, Tuatagaloa had a solid season totaling 166 completions in 263 attempts (63.1%) for 2,187 yards, 17 touchdowns, and 8 interceptions. He also tacked on 59 carries for 343 yards and 2 touchdowns As a junior in 2020, he played tight end and logged 7 receptions for 81 yards and a touchdown before an injury cut his season short. As a sophomore in 2019, he was forced to sit out the season in accordance with USHAA rules due to transferring to Orem. What makes Tuatagaloa such an important signing is his incredible ability to play multiple positions at the FBS level. Not many kids can do that. He is VERY capable at the quarterback position. He has a strong arm and a quick release. He excels at making pre-snap reads and making quick decisions with the ball. He has good footwork and that allows him to roll out of the pocket and make throws on the run or run himself. He keeps his eyes downfield which helps his decision-making when it comes to choosing to run or pass. His big frame at 6 foot 4 could potentially make him a huge target for Aggie quarterbacks. He has good hands and is very good at using his big body to create separation against smaller defenders. He is a willing blocker in the run game which is a must for the Utah State coaching staff. Regardless of which position he ends up playing, he is a great addition to the Aggies.

Adding depth at the position is sophomore preferred walk-on, Garrett Larson. Larson spent his redshirt freshman season of 2021 and true freshman 2020 season at Utah State as a member of the practice squad. Before enrolling at Utah State in the fall of 2020, He served an LDS Church mission. As a senior in 2018 at Davis High (UT), Larson enjoyed a fine season, completing 160 passes in 298 attempts (53.7%) for 1,877 yards, 15 touchdowns, and 13 interceptions. Larson has all the qualities a coach would want in a quarterback. He is studious, intellectual, detailed, composed, competitive, and leads by example. He does a good job keeping his feet moving in the pocket while at the same time keeping his eyes up to see downfield. He throws a nice deep ball and can be accurate to boot. He prefers to make a lot of pre-snap reads, as he knows where he wants to go as soon as he has the ball.

Coming Up On Wednesday: Running Back