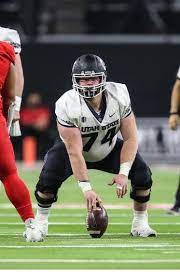 2021 players not returning: None

After seeing the majority of first-team action during spring ball, graduate senior Chandler Dolphin should be the first man up on the depth chart. As a senior in 2021, Dolphin played in 12 games with 11 starts. As a junior in 2020, he saw action in 2 games. As a sophomore in 2019, he saw action in one game, recording 17 snaps. As a redshirt freshman in 2018, he took 26 snaps and recorded 2 knockdown blocks in 4 games. As a true freshman in 2017, he spent the season playing on the Aggie practice squad and received a redshirt season. As a senior at Alta High (UT) in 2016, Dolphin earned Utah 4A first-team all-state honors from both the Salt Lake Tribune and Deseret News. Dolphin is the kind of raw, athletic, unheralded talent that Utah State has thrived on developing into solid offensive linemen in recent history. He is a versatile player that can play both guard and center. He has improved as an offensive lineman every season and that has paid off with his increased number of snaps. He plays with great aggression and drive. He excels at making protection and blocking calls at the line of scrimmage.

Also competing at a high level is junior Falepule Alo. As a sophomore in 2021, Alo battled an injury most of the year but was still healthy enough to play in 5 games with 3 starts. As a true freshman in 2020, he saw action in 5 games with 4 starts. As a senior at West High (UT) in 2019, Alo earned first-team all-region honors as he helped West to a 4-6 record in Utah’s largest classification of 6-A. He has been a benefactor in getting into a collegiate strength and conditioning program. He has had the opportunity to learn from a veteran Utah State offensive line and that has contributed to his rapid growth and development. Alo is a monster up front on the offensive line. He does a good job of gaining leverage on an opposing defensive lineman and driving him from the line of scrimmage. He has a powerful punch and his first step is fast off the ball. He can get under an opposing player and drive them back. He enjoys demoralizing opposing players by leveling them with vicious pancake blocks.

Looking to bring some competition to the position is preferred walk-on junior Aaron Bredsguard. As a sophomore in 2021, did not see action in any games and spent the season contributing to the practice squad. As a redshirt freshman in 2020, he saw action in one game but did not record any stats. As a true freshman in 2019, he did not see action in any games and spent the season redshirting and participating on the practice squad. As a senior at Viewmont High (UT) in 2018, Bredsguard earned first-team All-Region 5 honors after rolling up 61 tackles, 11.0 tackles-for-loss, 11.0 sacks, and 1 pass breakup, and 1 forced fumble. He was a 3-year starter on three consecutive Region 5 championship teams and capped off a stellar high school career with his performance as a senior. Bredsguard began his Utah State career as a defensive tackle and made the move to the offensive line during fall camp of 2021. Bredsguard has a tremendous motor that enables him to be a dominant lineman. He has the size of an interior player but the speed and moves of a much smaller player. He goes full speed on every play and is simply too strong for opposing players to make an impact at the line of scrimmage. He reads opposing schemes well and usually can blow them up at the line of scrimmage.

Coming Up On Tuesday: Offensive Guard