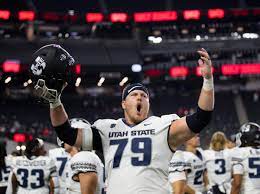 After spending all of spring ball running with the first-team offense, I see senior Wade Meacham starting at this spot in 2022. As a junior in 2021, he saw action in all 14 games. As a sophomore in 2020, Meacham saw action in 4 of 6 games. As a redshirt freshman in 2019, Meacham saw action in 1 game and played in 15 snaps. As a true freshman in 2018, he took 68 snaps while playing in the maximum 4 games and was still able to receive a redshirt season. As a senior at Layton High (UT) in 2014, Meacham averaged 6 knockdowns per game but earned Region 1 honorable mention honors at defensive tackle. He is an athletic offensive lineman that runs well out in space. The coaching staff believes he has the potential to be a very productive and long offensive lineman who will use his tremendous athletic ability to get after opposing defensive players. A huge plus is his ability to play both guard and tackle and that shows his tremendous versatility. His experience fits well with a veteran offensive line.

Competing to move up the depth chart is redshirt freshman Elia Migao. Migao joined the Aggies late last summer and spent the 2021 season redshirting. Before joining the Aggies, Migao was a key cog at Chaparral High (CA), as he helped the offense pave the way to an average of 263.4 yards on the ground his senior season. He was a two-time all-state offensive lineman and was named Southwestern League Lineman of the Year following his senior season. He is deceptively nimble and he moves well on pulls and on screens where most kids his size trip over their own feet. He has Above-average athleticism and an extremely strong lower body. His footwork is beyond what most kids his age possess. He can maintain a consistent pad level at the line of scrimmage. He is good at keeping his hands inside and once he is engaged with a defender his typically dominant and finishes his blocking assignment. He has the chance to play sooner rather than later leaning on his strength and ability to finish.

I believe that senior Jacob South will be the starter at this spot. As a junior in 2021, South battled an injury that limited him to playing in 7 games and was named the starter in each of them. As a sophomore in 2020, he was limited to just 4 games and was named the starter in each of them. As a redshirt freshman in 2019, he saw played in 10 games with 3 starts and played 210 snaps, and recorded 2 knockdown blocks. As a true freshman in 2018, he took 37 snaps and recorded 1 knockdown block while playing in 3 games and remaining eligible to receive a redshirt season. As a senior at Anacortes High (WA) in 2017, South earned a Class 2-A Northwest Conference first-team nod as an offensive lineman. South is a versatile player on the offensive line. He is a menacing blocker who routinely knocks defenders down or drives them back into the second level of the defense. He has good footwork and uses his athleticism to his advantage. What the coaching staff has found in him, is a very athletic kid that can play multiple positions along the offensive line. He is also a tough offensive lineman that possesses a high football IQ.

Competing to make a move up the depth chart is true freshman Sione “Tavo” Motu’apuaka. Tavo is the younger brother of Aggie defensive tackle Hale Motu’apuaka. As a senior at Mililani HS (HI) in 2021, he was a starter on the offensive line in all 7 games. As a junior in 2020, he has his season canceled due to covid. As a sophomore in 2019, he was a starter on the offensive line in all 9 games. He was originally committed to the university of utah but as the early signing period neared he chose to flip his commitment to the Aggies. Tavo is a very physical player who delivers menacing hits on opposing defenders who attempt to get by him. He explodes out of his crouch once the ball is snapped and immediately gets into position to execute his assignment. He does a good job maintaining a low center of gravity. He is a good athlete and very mobile for a player of his size. He is versatile enough to play at multiple spots along the line.

Sophomore transfer Austin Leausa joined the Aggies just a few weeks ago. Leausa began his collegiate career at Southern Utah University and has 4 years to complete his final 3 seasons of eligibility. As a covid-freshman at Southern Utah in 2021, Leausa played in 7 games with 7 starts. As a true freshman during the covid abbreviated spring season, he saw action in 4 games. Leausa is a physically imposing player. He has sneaky athleticism that will allow him to play either guard or tackle. Once he is engaged in a block he continues to move his feet often driving the opposing defensive player backward. He gets up into his blocks quickly and rarely gets caught on his heels. He has a nasty streak and isn’t afraid to put an opposing defender on his back.

I’m hearing that junior Jackson Owens may miss an extended period of time with an undisclosed injury. As a sophomore in 2021, Owens saw action in 3 games. As a redshirt freshman in 2020, Owens saw action in 4 of 6 games. As a true freshman in 2019, he played in 30 snaps and recorded 1 knockdown block while playing in 3 games and remaining eligible to receive a redshirt season. As a senior in 2018 at East High (UT), he earned a 6-A all-state honorable mention nod after helping lead the Leopards to a 7-3 record and a berth in the Class 6-A state playoffs. Owens was a road-grading offensive lineman for the vaunted East rushing attack that chewed opponents up. He is a good athlete that also participated in several track events in high school. He gets a great push at the line of scrimmage when opening holes for run plays. He stays low despite his height and uses both his upper and lower body very well. He is already solid as a run-blocking guard and will likely develop into a well-rounded offensive lineman.

Coming up on Wednesday: Offensive Tackle