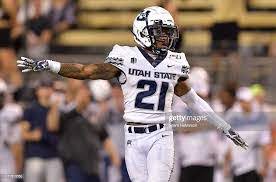 I see graduate senior Andre Grayson getting his fair share of playing time in 2022. As a senior in 2021, Grayson played in 13 games and accumulated 30 tackles, 3.0 tackles-for-loss, 1.0 sacks, and 3 pass breakups. As a junior in 2020, he played in 4 games, starting in 3, and was credited with 10 tackles. As a sophomore in 2019, he played in all 13 games and received 7 starts, while rolling up 47 tackles, 2.0 tackles for loss, 1.0 sacks, 1 interception, 6 pass breakups, and 2 forced fumbles. As a redshirt freshman in 2018, he played in 12 games and was credited with 4 tackles and 2 pass breakups. As a true freshman in 2017, he sat out the season as a redshirt. As a prep senior at Etiwanda High (CA) in 2016, Grayson earned a second-team All-Baseline League selection after tallying 48 tackles, 3.0 tackles-for-loss, 4 interceptions, 6 pass breakups, 1 forced fumble, and 1 fumble recovery. Grayson has great hands. He has developed into a quick defensive back with good ball skills. He also has a high football IQ. His quick reaction and fluid hip movement make him an ideal player to cover the opposing team’s slot receiver. He has made huge strides during his career at Utah State thanks to an incredible work ethic.

After spending time at several different positions during his career at Utah State, senior Ajani (AJ) Carter has a very good chance of stepping up and snatching the starting spot at this position. As a junior in 2021, Carter played in 13 games and racked up 45 tackles, 3.0 tackles-for-loss, 2.0 sacks, 3 interceptions, 1 pass breakup, 1 forced fumble, and 1 fumble recovery. As a sophomore in 2020, he played in 5 games and was credited with 7 tackles. As a true freshman in 2019, he saw action primarily on the special teams’ units in 12 of 13 games and was credited with catching 1 pass for 11 yards and 8 tackles on special teams. He will always be remembered as the player who caught the Hail Mary pass to win the most epic state championship game in Texas football history. Don’t let the lack of high school production fool you, Carter is coming from one of the talent-rich high school programs in the State of Texas. He has prototypical size for a defensive player. He is good at using his time as a wide receiver to help him read and react to plays as they unfold in front of him. He has good ball skills and can pick up significant yardage after securing an interception. He is very aggressive and likes to use his size to be physical in both run and pass defense. He has good speed and that allows him to make a minor mistake and still be able to make up for it. His athleticism has allowed him to play all over the field for the Aggies and that versatility makes him a very valuable player to the coaching staff.

Senior preferred walk-on Jaden Smith has carved out a nice role for himself. As a junior in 2021, Smith was a special teams demon playing in 12 games and making 6 tackles and 1 fumble recovery. As a redshirt sophomore in 2020, he did not see any action. As a sophomore in 2019, he spent the season redshirting per NCAA transfer rules. As a true freshman at Incarnate Word University in 2018, he played in 11 games, with 1 start, and recorded 10 tackles, 1.0 tackles-for-loss, and 1 QB hurry. Throughout his high school career, he served as a dynamic punt and kick returner. He also saw time as a running back and receiver on the offensive end while playing significant snaps in the defensive backfield. Smith has solid speed and deceptive versatility. He isn’t afraid to mix it up with bigger receivers. He enjoys being physical as a defensive back. His tenacity has made him one of the most valuable members of the Aggie special teams units.

Competing to make a move up the depth chart is true freshman JD Drew. As a senior at Booker T. Washington HS (OK) in 2021, Drew rolled up 30 tackles, 2 interceptions, 3 pass breakups, 1 forced fumble, and 1 fumble recovery that he returned for a touchdown. As a junior in 2020, he recorded 13 tackles, 1 interception, and 1 fumble recovery. As a sophomore in 2019, he was credited with 2 tackles and 1 blocked punt. Drew has long strides for someone his size and impressive speed. The speed he possesses stands out in the open field. He plays tight coverage and his athleticism allows him to make plays on the ball in nearly every situation. He is also a sound tackler when the opportunity arises and puts his entire body into his hits. He has great size and long arms for the cornerback position.

Adding depth at the position is transfer preferred walk-on redshirt freshman Ty Barnett. Barnett began his collegiate career at Weber State University. He has 4 years of eligibility remaining. As a true freshman at Weber State in 2021, he saw action in 1 game and was able to maintain his redshirt status. As a senior at Weber High (UT) in 2018, he dialed up 34 tackles and 3 interceptions. Barnett likes to play a physical brand of football. He spent a lot of time in high school playing bump and run coverage so he is very familiar with man coverage. He has good speed and doesn’t struggle to keep up with opposing wide receivers. He makes a good break on the football and is a capable tackler.

I expect senior Mike Anyanwu to reprise his role as a starter at one of the cornerback spots. As a junior in 2021, Anyanwu played in all 14 games with 10 starts and racked up 44 tackles, 1.0 tackles-for-loss, 2 pass breakups, 2 forced fumbles, and 1 fumble recovery. As a sophomore in 2020, he played 6 games with 1 start and recorded 3 tackles. As a redshirt freshman in 2019, Anyanwu saw action in 5 games and made 1 tackle. He was forced to redshirt the 2018 season after suffering an injury in fall camp that caused him to miss the entire season. As a senior in 2017 at Charter Oak High (CA), Anyanwu had a standout season earning first-team All-Area honors after pulling in 32 tackles, 1.0 tackle-for-loss, and a whopping 10 interceptions, and 11 pass breakups. Anyanwu is a very athletic football player that possesses good feet and which allows him to play well in coverage. He has solid lower body strength and agility that allows him to get in and out of breaks quickly. He plays a very physical brand of football. He is quick and athletic enough to recover on plays nicely and has developed into a very solid cover corner.

Competing to make a move up the depth chart is redshirt senior Xavion Steele. As a senior in 2021, he saw action in 4 games being credited with 1 tackle before an injury forced him to miss the remainder of the season and receive a medical redshirt. As a junior in 2020, he played in all 6 games, starting in 1, and logged 2 tackles. As a junior college transfer, he joined the Aggies in time for the 2020 winter semester. As a sophomore in 2019, at Fullerton Community College (CA), Steele racked up 59 tackles, 7.0 tackles-for-loss, 0.5 sacks, 2 interceptions, and 15 pass breakups. For his efforts, he was named Junior College Defensive Back of the Year by Gridironrr.com. As a true freshman in 2018, he tallied 48 tackles, 1.5 tackles-for-loss, 4 interceptions, returning 2 for touchdowns, 7 pass breakups, and 1 blocked kick. Steele is a natural ball-hawk and possesses blazing speed as he sprints down the field after an interception. He can make up for a misstep or mistake by closing on the ball well. His speed allows him to get into a position to make a play and his ability to track the ball in the air helps him make good use of it. He is a very physical player for his position.

Looking to make an impact during his second fall camp is sophomore Jamie Nance. Nance made the move from wide receiver to cornerback during spring ball. As a redshirt freshman in 2021, Nance saw action in 11 of 14 games, primarily playing on special teams but he did not record any stats. Nance joined the Aggies last summer after transferring from the University of Nebraska. As a redshirt freshman at Nebraska in 2020, he saw action in 1 game but did not record any stats. As a true freshman in 2019, he spent the season as a redshirt. Nance has exceptional speed and quickness which should help him make the transition to the defensive side of the ball. He is not just a straight-line guy, as he showed twitch and change of direction in his route-running. Thanks to his time as a defensive back in high school the position is not foreign to him. Spending time on both sides of the ball has helped him develop solid ball tracking skills and good hands. During his time on special teams, he showed that he has an aggressive nature and isn’t afraid of contact. He is a kid who could play early because of his speed and sheer athletic ability.

Adding depth to the position is true freshman preferred walk-on Ja’Kheo Mitchell. As a senior at Dixie HS (UT) in 2021, Mitchell totaled 18 tackles, 3.0 tackles-for-loss, 1.0 sacks, 6 interceptions, and 11 pass breakups. As a junior in 2020, he missed the season due to an injury. As a sophomore in 2019, he was credited with 1 tackle. Mitchell is an athlete in every sense of the word. I have him pegged as a cornerback because of his outstanding size and ability at the position, however, he could potentially land on the offensive side of the ball at wide receiver. He is exceptional at using his height to high point the football. He tracks the ball well once it is in the air. He has shifty feet that will help him quickly change direction. He can be a physical presence when necessary.

Coming Up On Thursday: Field Safety