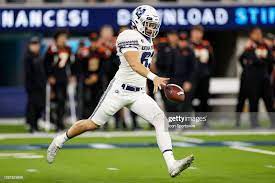 Sophomore Jacob Garcia has a firm hold on the top spot here. As a redshirt freshman in 2021, he saw action in all 14 games. As a true freshman in 2020, he did not see any action. Garcia is ranked as the No. 10 long snapper nationally by 247sports. As a senior at Servite High (CA) in 2019, he finished his career as the No. 3 rated long snapper by Rubio Long Snapping and the No. 4 rated long snapper in the country by Kohl’s Kicking School. Garcia puts his snaps right in the punter or holder’s hands nearly every time. His speed and timing in getting the ball to his target are exceptional. He also excels in his ability to get downfield and make a tackle once his primary job is complete. He prides himself on his accuracy.

2021 players not returning: None

Adding depth to the position is true freshman preferred walk-on Ryan Marks. Marks returned from serving an LDS Church mission in time to join the Aggies for spring ball. As a senior at Farmington High (UT) in 2019, Marks handled punting and kicking duties for the Phoenix as he averaged 38.4 yards per punt and landed 11 punts inside the 20. He also connected on 6 of 8 field goal attempts and hit 25 of 28 of his PAT attempts. As a junior in 2018, he averaged 42.6 yards per punt and landed 20 punts inside the 20. For his effort over his career Marks participated in the 2019 Under Armour All-American game. Marks ended his high school career ranked by Kohl’s Kicking School as the No.7 punter in the country. According to the Kohl’s rating system, He is not only a 5-star punter but he is a 4-star kicker as well. He punts from the traditional style of kicking. He kicks with poise and can hit a spiral that turns over very impressively. He has a big leg and will continue to improve.

Graduate senior Connor Coles returns for his final season of eligibility as the returning starter at this position. As a senior in 2021, Coles kicked in all 14 games and made 20 of his 29 field goal attempts, and hit 52 of his 54 PATs. As a junior in 2020, he saw action in 4 games and connected on all 3 of his field goal attempts, and hit 8 of 9 PATs. As a sophomore in 2019, he saw action in 1 game, kicking off 3 times during the Aggies win versus Stoney Brook. As a redshirt freshman in 2018, he kicked in 1 game and hit 2 of 2 PAT attempts. As a true freshman in 2017, he saw action in 3 games, handling backup kickoff duties in the Aggies wins versus Idaho State and at San Jose State. He was able to retain his redshirt status by sitting out the remainder of the season. As a senior at Bozeman High (MT) in 2016, Coles hit 6 of 8 field-goal attempts and connected on 36 of 39 PATs. Although he has not had the opportunity to display his talent, Coles is a very good kicker and he possesses a strong leg. He is a confident kicker and has good follow-through. He was rated as a 4.5* prospect by Kohl’s kicking camp and he was highly sought after following his senior season by Oregon State, Montana, and Montana State.

Making a strong case for more playing time at the position is junior preferred walk-on Elliott Nimrod. As a sophomore in 2021, Nimrod served as the Aggies kick-off specialist, kicking in all 14 games averaging 57.8 yards per kick and forcing 31 touchbacks. Nimrod joined the Aggies last summer after beginning his collegiate career at Arkansas State. As a true freshman at Arkansas State in 2020, he played in all 7 games and 50.1 yards per kick and forced 8 touchbacks. Nimrod displays excellent ball striking ability in the field goal and kick-off portions of his game. His drill work is sound and he is very confident in his ball striking and he has a good command of his rotation. Coming out of high school at Bentonville High (AR), he was rated as a 5* prospect by Kohl’s Kicking Camp.

I see three exceptional return men battling for the top spot on the depth chart in 2022.

Senior preferred walk-on Cooper Jones had a BIG spring ball session and is poised to make an impact in fall camp. As a junior in 2021, he saw action primarily on special teams in 8 games but did not record any stats. As a sophomore in 2020, he saw action in just one game and did not record any stats. As a true freshman at Butte Community College (CA) in 2019, he was primarily a return specialist, fielding 21 punt returns for 239 yards (11.4 avg) and 3 kick returns for 64 yards (21.3 avg.). As a senior in 2018 at Elko High (NV), he had 108 carries for 863 yards and 9 touchdowns, while also catching 15 passes for 349 yards and 3 touchdowns. He displayed his talent as a two-way player making 57 tackles and 4 interceptions, while also blocking 2 kicks. As a return man, he returned 10 kicks for 271 yards for an average of 27.1 yards per return and returned 8 punts for 144 yards for an average of 18.0 yards per return. He also returned one of those punts for a touchdown. Jones does a good job of catching a punt cleanly and not wasting much motion. If he needs to make the first defender miss, he can, and then he quickly finds a seam and explodes upfield. He also does a great job of catching the ball cleanly in traffic. He is a versatile player and because of his outstanding burst of speed, he could add value to the running attack if the opportunity arose.

Junior Kyle Van Leeuwen has been patiently waiting for his chance to show Aggie Nation what he can do. As a sophomore in 2021, Van Leeuwen saw action in all 14 games and caught 8 passes for 63 yards. As a redshirt freshman in 2020, he saw action in one game but did not record any stats. As a true freshman in 2019, he returned from his LDS Church mission just in time to join the team for fall camp. He then spent the season as a redshirt. As a senior at Timpview High (UT) in 2016, Van Leeuwen had a solid season pulling in 42 receptions for 903 yards and an amazing 18 touchdowns. For his effort, he earned Class 4-A second-team all-state and first-team all-region honors. Van Leeuwen is the younger brother of former Aggie wide receivers, Travis and Zach. Van Leeuwen and older brother of current Aggie wide out Timm. Van Leeuwen can get in and out of breaks quickly. He possesses tremendous hands for a wide receiver and is a quarterback’s best friend. He is tough across the middle of the field and he is willing to do the dirty work that is required from a slot receiver. He has good speed and is a precise route runner. He has a bright future ahead of him in an Aggie uniform.

Competing hard to get on the field is junior transfer, Terrell Vaughn. Vaughn joined the Aggies in time for spring ball after spending the first two seasons of his career at Ventura Community College (CA). He has three years to complete his final two seasons of eligibility. As a sophomore in 2021, he pulled in 58 receptions for 736 yards and 8 touchdowns. As a true freshman in 2020, he had a standout season totaling 91 receptions for 979 and 12 touchdowns. Vaughn is stepping into the team from the junior college ranks. He is a small and shifty back capable of turning short passes into huge gains as he picks up yards after the catch with little issue. Vaughn runs smooth routes and changes direction effortlessly, leaving defenders scrambling to catch up to him. He is also a weapon in the return game where he is a big-time threat with the ball in his hands.

KICK RETURN
To Be Determined