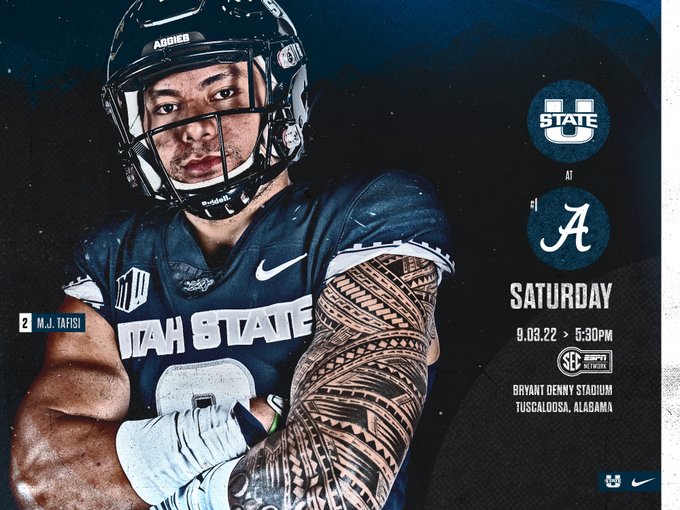 Charlie Potter the 247sports beat writer for BamaOnLine247.com, was kind enough to collaborate with me on a set of 10 questions about the Aggies second opponent of the 2022 season the number one team in the country the University of Alabama Crimson Tide. Huge shout out to Charlie for joining me this week!!

Alabama has had so much success in recent years with 6 National Championships since 2009. What keeps a perennial powerhouse such as the Crimson Tide hungry year after year?

It’s the million-dollar question, isn’t it? If it was easy, there would be more teams seeing a similar type of success. But since he took over the program in 2007, it’s really been Alabama and then everyone else. A simple answer is the Crimson Tide recruits the best players, gets them to buy into Saban’s process and then a lot of them develop into NFL draft picks. That’s a great winning formula. But the head coach is also relentless in his preaching of the process while also seeing the bigger picture and adapting to the ever-changing landscape in college football.

The extreme flexibility of the NIL rules has become a hot topic and subject to scrutiny. Do you feel like it’s become more difficult to recruit the level of player you are used to seeing or has it remained business as usual?

I think it has been a little bit more challenging for Saban and Alabama. Don’t get me wrong, they will still sign a top-five class almost every cycle, but what once were considered locks to commit to the Crimson Tide, especially some of the elite talent within the state, is going to take more work. Luckily for Saban, he is the best recruiter that college football has ever seen, and he has an on-field staff full of high-level recruiters that can still get the job done on the trail.

It isn’t so much that the coordinators have brought in their own ideas or schemes as it is Saban has watched the college game change and adapted his approach, with the coaches that he hired implementing the changes he wanted. Sure, they will add their own wrinkles here and there, but for the most part, what you see on the field is Alabama’s offense and defense. That is what has made Saban successful is his willingness to adapt and then do whatever may be a thorn in the Crimson Tide’s side even better than the opponents that saw success using.

Junior quarterback Bryce Young won the Heisman Trophy following the 2021 season and has the rare opportunity to become a repeat winner. Do you feel like there is any undue pressure for Bryce to perform at an unexpected level or will it just be business as usual?

I don’t think there’s any added pressure for him to play well. If anything, other players around him have to step up with key offseason losses at wide receiver and on the offensive line. Young is a smart kid that has been groomed to be a star quarterback for most, if not all, of his life, and he played extremely well in his first year as Alabama’s starter. I think with that experience and having offensive coordinator Bill O’Brien back for another year, he’s more comfortable in the role and should produce similar numbers as he did a season ago, especially if he can bring some of the younger players that are stepping into larger roles along with him this fall.

Junior running back Jahmyr Gibbs came to Tuscaloosa after beginning his collegiate career at Georgia Tech. How much of an impact will he have on the running back rotation?

He’ll be the first back on the field Saturday night. Gibbs has impressed since he stepped foot on campus and has earned consistent praise from Saban and his teammates. He’s now part of a deep running back room that welcomed back three players that have logged first-team minutes but were recovering from injuries in Jase McClellan, Trey Sanders, and Roydell Williams. UA could utilize all four backs this season, but Gibbs is expected to make a huge impact not only in the running game but also as a receiver out of the backfield and as a kickoff returner.

The Crimson Tide has added two potential starters in junior Jermaine Burton coming over from Georgia and junior Tyler Harrell moving in from Louisville. How big an addition were these two to the wide receiver room?

Burton has been the Crimson Tide’s most consistent wide receiver since he joined the program. It’s a position with a lot of opportunity with Jameson Williams and John Metchie turning pro after the 2021 season, but Alabama has a talented, yet inexperienced, group of wideouts. That’s why it looked to the transfer portal for help, and Burton is set to start in the season opener. As for Harrell, he wasn’t 100 percent healthy at the start of the preseason and needed to play with more consistency, but I think he’s coming along and could make an impact as early as Game 1. There will be others to see the field before him, though, as guys – whether returning players like Traeshon Holden or freshmen like Kobe Prentice – has impressed in practice.

There is more of a veteran presence up front than, say, last year. The group we should see on the field, if everyone is healthy, will be comprised of four seniors and a sophomore in Latham, who is a former 5-star recruit that locked up the right tackle position this offseason. On the other side of the line, Steen quickly entrenched himself as the first-team left tackle, giving Alabama another impact transfer. The interior has a lot of experience, as well, with Ekiyor, Dalcourt, and Cohen all back, but sixth-year senior Kendall Randolph looks to be the guy at left guard with Cohen being able to play either guard spot. This is a position worth watching early in the year, as the line will look to improve, but it’s also a group that has gelled his preseason.

Out of those three, I would pick Young. He was second among UA defensive linemen in tackles for loss last year, and this is a group that will need to generate more of an interior pass rush with Phidarian Mathis (9.0 sacks, 12 tackles for loss) moving on to the NFL. Young seems like a top candidate to do just that, but guys like Dale, Tim Smith, Jamil Burroughs, and even freshman Jaheim Oatis have received rave reviews from the coaches and their teammates for their play leading up to the season opener. If the Crimson Tide can get more negative plays from its big fellas up front, to go along with its edge rushers, the front seven can be lethal.

Your linebacking crew is absolutely loaded with talent, which includes the 2021 Bronco Nagurski award winner and All-American junior Will Anderson, returning starter sophomore Henry To’oTo’o, and two players who have seen plenty of game action senior Jaylen Moody, and sophomore Dallas Turner. Anderson is a tough act to follow, which of the other three players do you feel are going to step up as one of the great Alabama linebackers?

You could really make a case for all of them, but I think Turner is poised for a breakout season. He took over the starting Sam linebacker role during the second half of the 2021 campaign and finished with 8.5 sacks – which is more than Anderson had as a full starter his freshman year in 2020. Turner has worked this offseason to be able to work multiple pass-rush moves and should once again be productive off the edge. With Anderson deservedly getting a lot of attention from opposing offenses, it could lead to Turner being the beneficiary and piling up sacks. The inside linebackers, both seniors, are also set to have big seasons for the Tide.

After seeing Utah State win 31-20 over the University of Connecticut on Saturday what was your first impression of the Aggies this season?

I was surprised UConn was able to build a 14-point lead and only lost by 11, to be honest. I know Utah State had to replace some key pieces from last year’s team, but the Huskies have been pretty bad over the last few years. That being said, Utah State’s ability to bend but not break was commendable, and I think quarterback Logan Bonner is a talented player. Still, the fact that the Aggies gave up nearly 250 rushing yards made me think this Saturday’s game could get ugly in a hurry if Gibbs, McClellan, and company can get to the next level.