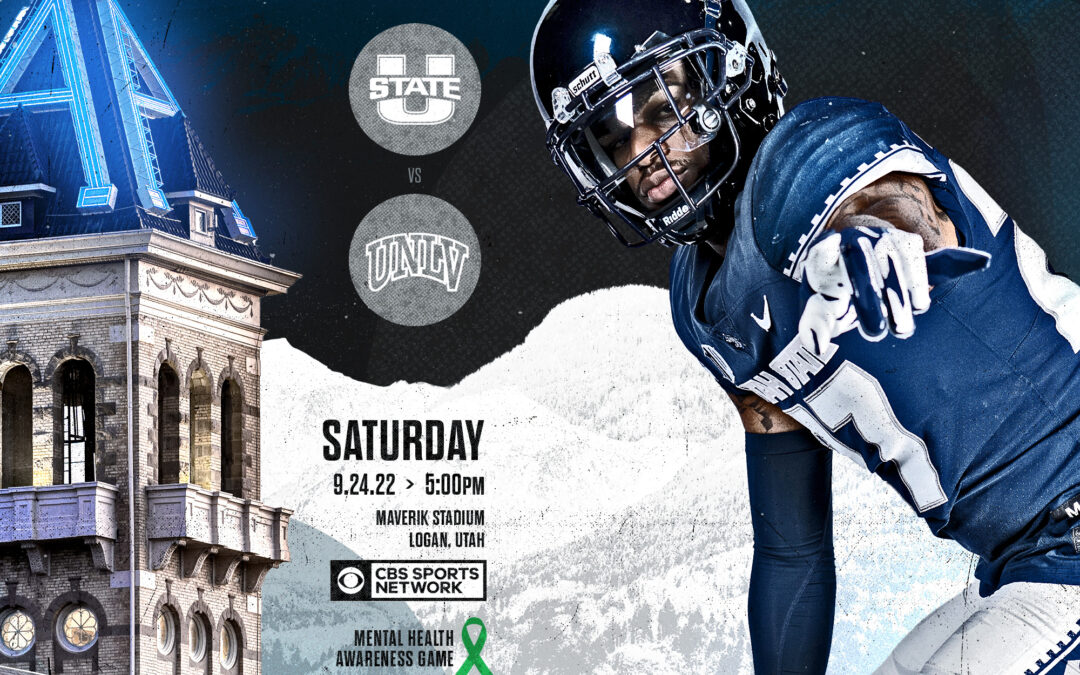 Alex Wright the UNLV beat writer for The Las Vegas Review-Journal was kind enough to collaborate with me on a set of 10 questions about the Aggies fourth opponent for the 2022 season, opening Mountain West Conference play at home against the UNLV Rebels. Huge shout out to Alex for joining me this week!!

When UNLV Head Coach Marcus Arroyo first arrived in Las Vegas following his hire from the University of Oregon, his first order of business was to begin recruiting a higher caliber of athletes than most coaches had done at UNLV in the past. Now that Coach Arroyo is into this third season, do you feel that his approach to recruiting has begun to pay dividends and if so how?

Arroyo’s recruiting method is starting to pay off. Some of UNLV’s best-recruiting classes have come under Arroyo and that isn’t a coincidence. His focus has been on acquiring the best talent possible in the transfer portal, with junior college prospects and former power conference players. And when it comes to high school players, get the best talent possible. Arroyo has often filled out the rest of his class with three-star players or better. All of that has been part of his plan to have quality depth from the starters, all the way down to the scout team.

Leading up to the 2022 season sophomore quarterback Doug Brumfield had seen action in just 4 games in two years. Talk about the evolution of Doug Brumfield and what he brings to the table.

Right now, through three games, the biggest takeaway from Brumfield’s play is that he’s been healthy. That plagued him last year after he established himself as the starter last year. So in these first three games, it’s been a pleasant surprise to see Brumfield be healthy and effective. We saw him use his legs against North Texas, rushing for 100 yards and two touchdowns. Brumfield’s ability to make plays with his legs gave him an advantage in the quarterback competition. Brumfield has also benefited from improved offensive line play. Against Idaho State and North Texas, Brumfield had a clean pocket and showed his accuracy and ability to hit the deep ball. If he stays healthy, Brumfield might be one of the more productive quarterbacks in the Mountain West.

After losing all-time leading rusher Charles Williams following the 2021 season, the Rebels have now added Louisville junior graduate transfer Aidan Robbins to the fold and not only does he sit atop the depth chart, he currently leads the team in both carries with 53 and rushing yardage with 346 yards and 6 scores. How big of an addition to the team was Aidan and what can the Aggies expect from the Rebels rushing attack?

Robbins had his breakout game against North Texas when he rushed for a career-high 227 yards. At 6-foot-3 and 230 pounds, he is bigger than some of the defenders he will face in the Mountain West. His size gives him the ability to run through defenders and easily break tackles. Even with his size, Robbins is very fast and the coaches have been impressed with his ability to cut in and out of tight corners and change directions. As much as the Rebels want to push the ball down the field with the passing game, they want to be an effective running team and Robbins gives them that and more.

Through the first three games, it appears Doug Brumfield likes to spread the ball around pretty evenly in the passing game. Michigan State sophomore transfer Ricky White leads the team in receptions with 19 and receiving yardage with 317, followed by junior Kyle Williams with 15 grabs and 189 yards, and City College of San Fransisco senior transfer Jeff Weimer with 11 catches for 123 yards. White seems to be the big play guy but talk about how well these three complement each other and make the passing attack a threat.

From the start of fall camp, the trio of White, Williams, and Weimer established themselves as the starting receiver corps. Both White and Williams are deep threats on the outside and Weimer is a steady slot receiver with good hands. But they aren’t the only receivers. UNLV’s second team of receivers, Nick Williams, Zyell Griffin, and Senika McKie could be starters on any team in the conference. The depth at wide receiver was talked about a lot during fall camp and it gives Brumfield and Arroyo plenty of options in the passing game.

Brumfield and Robbins’ effectiveness is predicated by how well the offensive line plays. And through three games the Rebels’ offensive line has been effective. It’s important they play well because Brumfield has been at his best with a clean pocket. Against Idaho State and North Texas, the offense was at its best because Brumfield had a clean pocket and Robbins had lanes to run. With the group having another year under their belt, they should be able to sustain their early success.

The Rebel defensive line isn’t quite as experienced as its offensive counterpart, senior EDGE defensive end Adam Plant (6 2021 starts 11 games), senior defensive tackle Eliel Ehimare (9 2021 starts in 12 games), and senior nose tackle Tavis Malakius (1 2021 start in 12 games). Assess how this position group has jelled since the season began and how they have performed through the first three games.

It’s been a pleasant surprise to see the Rebel defensive line play so well. They have been able to get into the backfield and get pressure on the quarterback and create tackles for loss. The Rebels suffered an injury to nose tackle Naki Fahina in the first game, but Adam Plant Jr., Eliel Ehimare, Tavis Malakius, and Darius Johnson have stepped up and been an important part of the Rebels having success in controlling the line of scrimmage. A goal for them in the offseason was to control the line of scrimmage and stop the run. If they were able to stop the run, they felt like this was going to be a good indicator that they were going to be successful as a defense. So far, they’ve done a good job with that and it’s led to success for the defense as a whole.

Senior MIKE linebacker Austin Ajiake is again off to a hot start this season leading the team in tackles with 24.0, while also chipping in 3.0 tackles-for-loss, 1.0 sacks, and an interception. How big of a steadying influence is he on the other two starting linebackers, senior WILL linebacker Kyle Beaudry (4 2021 starts in 12 games), and former Utah State Aggie transfer senior STUD linebacker Elijah Shelton (0 games played in 2021)?

Ajiake is one of the steady forces on the UNLV defense and he’s grown into his role nicely. Having him as the rock to the Rebel linebacking room has been a plus. Beaudry is playing a lot more minutes and Shelton has been a nice addition to the room. The Rebels needed to fill the void left by Jacoby Windmon and it appears this trio will do a serviceable job at doing that. They will be needed to help the Rebels top the run, and so far they have been able to do that.

The Rebels defensive scheme prefers to use five defensive backs and overwhelm opposing offenses with an aggressive secondary. Behind the experience of junior cornerback  Nohl Williams (8 2021 starts in 10 games), sophomore Iowa State transfer safety Jordyn Morgan (12 games), sophomore cornerback Cameron Oliver (11 2021 starts in 12 games), and the inexperience of sophomore safety Johnathan Baldwin (1 2021 start in 7 games) and junior Nickelback Jerrae Williams (no games in 2021 or 2020) there seems to be a good mix of experience and youth. How have the older three players helped the younger two players grow up in a hurry against a challenging mix of early season 2022 opponents?

UNLV’s secondary is very young if you just look at their class standing, but a lot of the young guys have logged a lot of minutes. The coaches want the more seasoned players to use that experience to help guide the younger players. Nohl Williams was one of the players who got a lot of playing time as a true freshman in 2020. Now, he’s one of the leaders, along with Jerrae Williams who made an impact while he sat out last year and played on the scout team. Cameron Oliver is another player that the coaches have touted as someone who has made a lot of improvements this offseason. The secondary has been the weakest link on the Rebels’ defense, but it appears this group could provide a step up in play.

Sixth-year senior kicker Daniel Gutierrez has a reputation for having a HUGE leg and has connected on 37 of 45 career field goal attempts BUT has been limited to just one attempt in 2022, a 39-yarder against Idaho State that he hit. Describe just how big a leg Gutierrez has, and talk about his overall importance to the success of the Rebels in 2022.

Having a kicker like Gutierrez makes Arroyos’ job a lot easier. After Charles Williams and Jacoby Windmon, Gutierrez was the most reliable and productive player on the team. Given how many close games the Rebels had last year, they could be in just as many this year. I think having Gutierrez’s leg will be a benefit if UNLV is in any close games and has a sure-bet kicker that could get them three points.

I am really surprised UNLV blew out North Texas. I expected it to be a close win for the Rebels, if not, they pull away late and make the final margin bigger than what the game indicated. But the way they put away North Texas surprised me. Now, we will see if they can do it on the road (after failing at Cal) and against a conference team. What I’ve been most surprised by is the defense. They’ve done a great job of working to get into the backfield and winning battles at the line of scrimmage. Even though they have given up a few big plays, it’s a good sign they’ve shown they can make second-half adjustments and put together quality second halves.