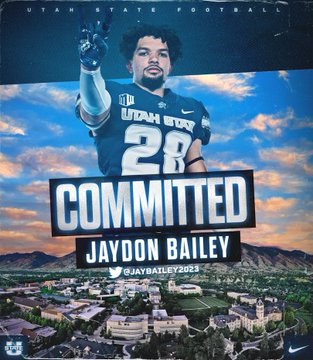 There were two standout performances this week and both of those future Aggies have earned the honors.

This week my first Utah State football recruit of the week will be going to East High (UT) EDGE rush defensive end, Zion Andreason. Although the Leopards lost to Brighton High (UT) 3-14, Zion had a HUGE game. Andreason racked up 7 tackles, with 5 of them of the solo variety, including 5.0 tackles-for-loss, and 4.0 sacks. Andreason looks to get the Leopards back to their winning ways when they take on Skyline High (UT) on Thursday.

My second Utah State football recruit of the week will be going to Steele High (TX) running back Jaydon Bailey. Bailey helped Steele improve to 5-0 on the season while leading the Knights to a 48-7 win over Fort Bend Christian Academy (TX). He carried the ball 24 times to the tune of 177 yards and four touchdowns, while also catching one pass that was good for another 2 yards. Bailey looks to keep the Knights five-game winning streak alive in two weeks when they take on New Braunfels High (TX).