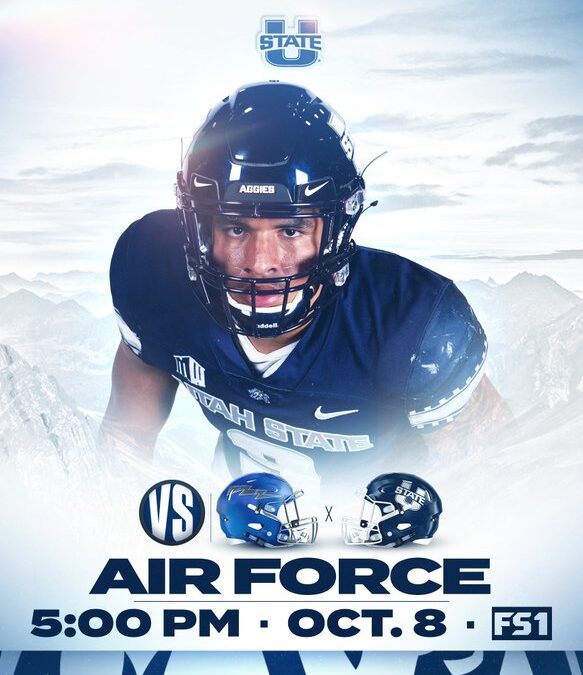 Rick Baum the Air Force beat writer for @SSN_AirForce part of the Sideline Sports Network network, was kind enough to collaborate with me on a set of 10 questions about Utah State’s sixth opponent for the 2022 season. The Aggies face the Air Force Falcons at home in the second Mountain West Conference matchup of the year for Utah State. Huge shout out to Rick for joining me this week!!

Head Coach Troy Calhoun has been a staple of Air Force Football since 2007, amassing a record of 115 wins and 76 losses. He won a Mountain West Conference Championship as recently as 2021. Coach Calhoun seems to be a love him or hate him kind of guy. Talk about his relationship with his players, the media, and the fans around Colorado Springs.

TC is an Air Force Falcon in every sense of the word. Troy’s strongest relationships are with his players. Calhoun is a former AF quarterback himself, and he uses his experience as a Service Athlete to relate to and mentor his team. Troy’s relationship with the media is more along the lines of Bill Belichick. The media attempts to extract information and Troy tells them what he wants them to hear, no status updates at all, injury or otherwise. Calhoun stresses Service and Commitment to the media and delivers at least one baseball or basketball analogy per interaction. For the most part, the local fans are very much tied to the possession of the coveted Commander-in-Chief Trophy. The fans are hungry to bring the Trophy home for the first time since 2016. If recaptured, the fan base will realign once again.

For those that may not be very familiar with the triple-option offense that the Falcons deploy. Can you briefly describe it, how it works, and why it is so successful at Air Force?

The Air Force Triple Option is in simplified terms just that. The Quarterback breaks the huddle and has 3 initial options in this “run first” attack.

Option 1 – Place the ball in the belly of the fullback, read the defensive reaction and either continue the dive or pull it and follow blocks.

Option 2 – On the snap, start an immediate flow left or right. Keeping the tailback in his line of sight, then pick the moment based on the defensive alignment and either keep or pitch it.

Option 3 – The third choice is the use of the slot back. This position is typically occupied by one of the best downfield blockers, receivers, and playmakers. This Option determines whether a pass is warranted. The way the Defense reacts to the various locations the slot back ends up directly affects the read-and-play outcome. Wide receivers, tight ends, and even running backs then can be targets.

Senior quarterback Haaziq Daniels has the ability to be an electric player. He’s already run for 244 yards and two scores and passed for 374 yards and four more touchdowns on just 17 completions. Talk about his leadership skills and just what he means to the Air Force program as the field general.

Haaziq Daniels is the heart and soul of this team on the offensive side of the ball. Ziq owns the all-time longest rushing and passing touchdowns in the sixty-six-year history of Air Force Football. Daniels, a dynamic playmaker, is 16-5 as a starter in his 3rd season. The attitude and competitive spirit of Daniels are mimicked by this team.

The two-headed monster running back duo of senior Brad Roberts (573 yards, 7 TDs) and junior John Lee Eldridge (408 yards, 1 TD) gives opposing teams nightmares. Can you please describe the running style of each player and how they fit within the Falcons scheme?

The Air Force rushing attack is our version of Thunder and Lightning.

Thunder – Senior Fullback Brad Roberts. Roberts is a stout tailback playing the FB position. Brad is an incredible North/ South runner who excels between the tackles and can also take an occasional wide toss while turning the corner.

Lightning – Junior John Lee Eldridge III. Eldridge is an electric talent, leading the nation in average yards per carry. John is a 4.39 speedster with extreme balance and cutback ability.

Offensive Line Coach Lobo has his “Diesels” primed to continue relentlessly pounding opponents with his cutting-edge blocking schemes. The line is rock solid with junior tackles Everett Smalley and Adam Karras. Smalley is the lightest in weight on this line and also the most active, leading the charge downfield. Holcomb is an old-school throwback lineman with a lunch pail mentality as he imposes his will on opponents. Isaac Cochran is very much an NFL prospect going into his senior year. Thor Paglialong and Wesley Ndago are extremely consistent. Depth and rotation make this group ready to answer the call. The O-line depth includes Luke Hallstrom, Ethan Jackman, Ryan Keating, Mark Heistand, and Steve Iles.

The Defense turns to senior Christopher Herrera Jr to lead this group. Herrera has been a key member of this line since the 11-win 2019 squad, his ability to turn plays back to his teammates has always been underappreciated. Herrera led all Falcon defensive linemen in tackles a year ago. Our linebacking corps is the strength of this Defense. Vince Sanford is on the Bednarik Award shortlist. Alec Mock and TD Blackmon continue to keep up their exceptional play.  Mock is a cerebral player with bone-jarring tackling capability. Relative newcomer and versatile athletic “Super Freak” Bo Richter is a huge surprise for the Falcons. Additional depth starts with the immensely talented Jonathan Youngblood, Nasir Rashid, Matt Malloy, and Jace Waters.

The Falcon secondary boasts four juniors, cornerbacks Mike Mack (9 career starts) and Eian Castonguay (6 career starts), strong safety Camby Goff (13 career starts), and free safety Trey Taylor (15 career starts). This position group is slightly inexperienced but proving to be more than capable of holding their own. As a group, they only allow 151.6 passing yards and only 3 passing touchdowns. Who do you feel has really emerged as the star of the group and what makes them so successful at defending the pass?

The defensive backfield is led by Trey Taylor at Free Safety. Taylor, the cousin of NFL Hall of Famer Ed Reed, looks like a possible generational type talent. Taylor missed the first three games last season and finished the season as the Falcons leader in tackles. This year Trey is second in tackles and is thriving alongside Camby Goff, who leads the team in interceptions (2) and passes defended (7).

Sophomore kicker Mathew Dapore has hit all 20 of his PAT attempts and 8 of 9 field goal tries including two from 51+ yards. Talk about how important Dapore is to the Falcon scoring attack.

Matt Dapore has the ability before his career is finished to become the all-time leader in scoring for Air Force. After winning the job as a true freshman, Dapore has missed only 3 field goals in 17 games and only one PAT. The Falcons will not hesitate to put Dapore on the field inside of 60 yards.

The Falcons were recently hit with sanctions from the NCAA regarding recruiting violations that included hosting recruits during dead periods and providing them with improper benefits. The recruiting restrictions include a reduction of 46 total official visits over the next two academic years; a ban on unofficial visits from Sept. 1 through Oct. 12; a four-week ban on recruiting communications this academic year; a reduction by 34 in evaluation days; and a reduction in the size of the football roster by 10 for four years. Do you feel the punishment handed down was severe and how do you see it affecting the Air Force program?

The Falcons self-reported recruiting violations during the recruiting “Covid Dead Period.” While most schools were still allowing limited recruiting visits, USAFA being a Military Institute was on lockdown. Some coaches chose to ignore the mandate and are no longer at Air Force. The punishment will not affect Bowl or Conference Championships eligibility. The sanctions imposed by the NCAA are significant, but not damaging overall.

The Falcons have for the most part continued to be the model of consistency. Surprises have been…

1) The number of injuries to starters.

2) Ball security issues (too many fumbles).