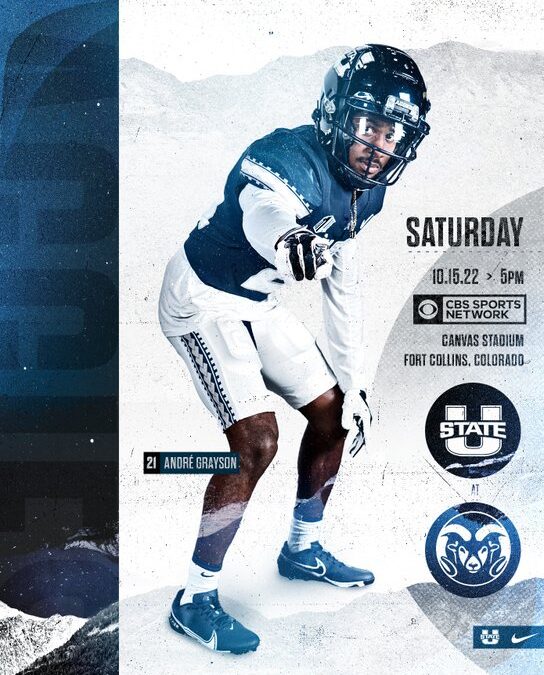 Kevin Lytle the Colorado State beat writer for The Coloradoan was kind enough to collaborate with me on a set of 10 questions about Utah State’s seventh opponent of the 2022 season. The Aggies face the Colorado State Rams on the road at Fort Collins for the third Mountain West Conference matchup of the year for Utah State and the Aggies second Mountain Division matchup, where the Aggies are hoping to win their second straight game. Huge shout out to Kevin for joining me this week!!

Following the firing of former Head Coach Steve Addazio, the Rams signed Head Coach Mike Norvell away from Mountain Conference foe, the University of Nevada. How significant was the signing of Coach Norvell and what changes has he made to the culture of the program?

It’s been significant. The fan base was angry and disenchanted at the end of last season following the years of mediocrity (and worse) in the program. The Addazio hire was a disaster almost from the start. He left as one of the most unpopular coaches in program history. In the offseason, Norvell helped reconnect the program with the community. The losing start has dimmed some of the excitement but in the long term, most fans feel excited about the future.

Talk about the changes in the offensive and defensive schemes that Coach Norvell has implemented. Explain to Aggie Nation how they will differ in look compared to what we have seen the last few years under former Coach Addazio.

The Addazio-led offense was pretty old school, with heavy interior running. The Rams under Addazio only went pass-heavy when required by the scoreboard, such as late in the game in Logan last year. Norvell wants to run the Air Raid but, frankly, it’s not in place yet. The offensive line and QB issues have made it so the offense has been poor. Expect a good dose of running Saturday with some shot play attempts in the passing game.

Colorado State starting quarterback redshirt freshman Nevada transfer Clay Millen had started the first four games of the season but suffered a shoulder injury against Sacramento State. True freshman Brayden Fowler-Nicolosi got the start last Friday during the win against Nevada. How do the two quarterbacks compare and contrast to each other and who do you believe the Aggies will see get the start Saturday night?

Millen is a pocket passer with some pocket mobility. He’s accurate (near 75%) on the season, but still young and misses some big play chances. Millen will miss this week as he continues to heal from a shoulder injury. Fowler-Nicolosi is a true freshman and very green. He has a big arm, quick feet, and scrambling ability. He also shows inexperience and has failed (albeit in very limited action) to consistently hit his targets. It won’t be a surprise to see Giles Pooler as well. He’s a redshirt freshman lefty who has never thrown a college pass in a game. He’s a pocket passer. CSU has the youngest QB room in the nation with two true freshmen and two redshirt freshmen. They’re talented but also sure to face growing pains.

The rushing attack of the Rams has produced 361 total yards this season but 168 of those yards came on 24 carries last Friday night during the Rams 17-14 victory at the University of Nevada courtesy of junior Nevada transfer Avery Morrow. Do you feel like that could become more of a trend as the season continues, or was it more of a case of taking what the defense gives up and feeding the hot hand?

I would expect plenty of running and Morrow will likely get the first crack after his big game. The offensive line is finally expected to have some continuity with the same five starting this week as last, the first time this season it has happened. With the QB injury issues, expect CSU to run the ball.

With 32 receptions for 491 yards and five touchdowns, junior Nevada transfer Tony Hortin is CLEARLY the go-to guy at wide receiver. However, seniors Ty McCullouch and former Nevada transfer Melquan Stovall were your second leading receivers and chose to enter the transfer portal following the completion of the 2022 season. Who do you believe will step up and help make the Rams passing game a success?

Horton is a star and it wouldn’t shock me if he’s playing Sunday’s a year from now. In addition to those receiving yards, he’ll also be CSU’s punt returner. Heck, the Rams even tried to have him throw a trick play pass last week. That said, SOMEONE else needs to get involved for the offense to click. Three true freshmen see the field at times in receiving positions. Justus Ross-Simmons seems most likely to make an impact at this point. Also, keep an eye on tight ends, Jordan Williams and Tanner Arkin.

The experience was supposed to be a big key and then injuries happened. Bivens missed time. Keys missed three games in a row. Left tackle Brian Crespo-Jaquez was hurt and at one point CSU was missing three of five starts. That’s hard for anyone to overcome, especially a team in a rebuild. The good news is the line was basically back to full strength last week and should be again. It’ll be easier for this team to find consistency.

Not to dismiss any issues the defense has had, but some of the blame can go to the offense for lack of success. The defensive line is good and Kamara especially is a game-wrecker for offenses. He’s in the backfield all the time. The biggest thing for CSU is to limit the explosive plays. They were prevalent in the first four games but limited last week in CSU’s first win.

It seems like graduate senior linebacker Dequan Jackson (31 starts 42 career games) and his running mate senior linebacker Cam’Ron Carter (26 starts 43 career games) have been terrorizing Mountain West Conference defenses for a decade. They are #2 and #3 on the team in tackles in 2022. Talk about the role that each player fills not only as a piece of the Colorado State defensive scheme but also as two of the elder statesmen on the defense and how each of them fills a role of leadership.

Jackson is on the field a lot. Every time a new staff comes in he has to prove himself once again and always does. He’s just a super smart player. He’s also the heart and soul of the defense and one of the most respected guys in the locker room. Carter struggled some in spring but has bounced back and he, along with a few others, fills the second linebacker spot. Those two are experienced, but the linebacker group as a whole needs to play better.

For those of us, that really keep an eye on the happenings with each team in the Mountain West Conference, it’s been no secret that the Rams have had not only starters but several key players leave the team not only prior to the season but as the season has progressed as well. Talk about the overall impact the transfers have had on the team and how the team has reacted to them and moved on.

It’s been a significant group and CSU is now down to about 65 scholarships. That means, obviously, that depth has been diminished. But Norvell and the players also say it’s been a good thing. They say there were too many players with other agendas and one foot in and one foot out. The message from the locker room is the team is more unified than before and now moving in the right direction.

Colorado State has now opened the 2022 season at 1 and 4. The last four games for the Rams have been a tough 19-34 home loss to Middle Tennessee State, a 7-38 loss on the road to the PAC-12’s Washington State, a rough 10-41 home loss to FBS top 5 team Sacramento State, and a HUGE last second 17-14 road win over the University of Nevada. Has anything the Rams have done thus far surprised you at all and what has really stood out to you now that they are five games in?

The overall offensive struggles have been a surprise, although explained by offensive line and QB injury issues. The biggest thing that stands out is how big a rebuild this is. It’s been about five years of mediocrity or worse and it’s quite an overhaul to fix all the issues that have festered. I think it will happen with this coaching staff, but it’s far from a one-year fix.