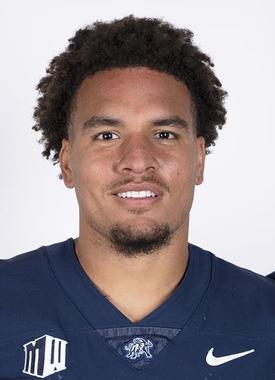 My offensive game ball will go to be going to graduate senior running back Calvin Tyler Jr. During the Aggies 17-13 win over Colorado State, Tyler was the offensive workhorse out of the backfield toting the rock a team-high 24 times for another team-high 129 yards, good enough for a 5.4 yard per carry average. Tyler’s 129-yard effort is his third straight 100+ yard game in a row.

After the standout effort by the entire Aggie defense against the Rams, I’ll be handing out two defensive game balls.

My first defensive game ball will be going to junior defensive end, Danny Grzesiak. Grzesiak tallied five tackles, including three solo tackles and two assists but each one had a huge impact on the outcome of the game. Grzesiak had a career-high 3.0 sacks and a career-high 3.5 tackles-for-loss. He also forced a fumble, broke up a pass, and recorded a QB hurry.

My second defensive game ball will be going to junior linebacker MJ Tafisi. Tafisi racked up a team-high twelve tackles including seven solo tackles and five assists. He was also credited with 1.5 tackles-for-loss.

My special teams game ball will be going to junior punter Stephen Kotsanlee. Kotsanlee saw some moderate action as he booted the ball 5 times including punts of 59, 58, and 55-yards for an average of 47.2 yards per punt landing one inside the 20-yard line.