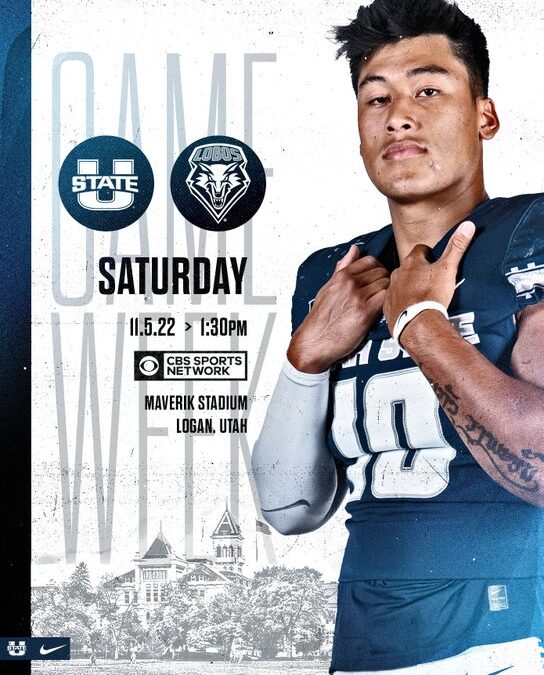 Rick Wright who covers the University of New Mexico for the Albuquerque Journal was kind enough to collaborate with me on a set of 10 questions about Utah State’s ninth opponent of the 2022 season. The Aggies face the New Mexico Lobos at home Saturday afternoon. It’s the fifth Mountain West Conference game of the year for Utah State and the Aggies fourth Mountain Division matchup, where the Aggies are hoping to get back to their winning ways in pursuit of bowl eligibility. Huge shout out to Rick for joining me this week!!

Head Coach Danny Gonzales has been the head man since 2020. He’s a former Lobo player and began his coaching career at New Mexico as well. Talk about what progress you feel has been made thus far and what Coach Gonzales needs to address to make the Lobos more competitive in the future.

Clearly, the offense is of the greatest concern. Improvements on that side of the ball need to be made across the board, but arguably the most urgent need is a top-level quarterback. UNM is hoping JuCo transfer Justin Holaday, who will start on Saturday, can be that guy. If not, they’ve got commitments from a couple of promising high school QBs.

New Mexico runs a very unique style of the triple option. Could you please describe how the Lobos brand of offensive scheme operates?

UNM’s offense is by no means the dedicated triple-option offense the Lobos ran under Bob Davie. They mix in triple option with RPOs and more conventional stuff. Obviously, not much has worked so far, even after the firing of O-coordinator Derek Warehime after the Wyoming game. We’ll see if getting healthier in the O-line, (maybe) getting their No. 1 deep threat back at WR, more time for Holaday to get acclimated, etc., makes a difference on Saturday.

The Lobos have tinkered with using two quarterbacks over the last three weeks. Who do you believe we will see get the start on Saturday afternoon, sophomore junior college transfer Justin Holaday or graduate senior transfer Miles Kendrick and what would that player bring to the table?

Gonzales has said Holaday absolutely, positively is his starting quarterback. You shouldn’t expect to see Kendrick or anyone else at quarterback unless Holaday gets hurt, is totally ineffective, or if it’s a blowout by either team.

Redshirt sophomore running back Nate Jones leads the team with 83 carries for 308 yards and a score. Talk about his importance to the success of the New Mexico offense.

He’ll alternate with true freshman Christian Washington, and JuCo transfer Sherod White likely will get some work as well. If the passing game can be more of a threat than it’s been, the run game would benefit, and of course vice versa. I think all three, particularly Jones, are better running backs than they’ve been able to show so far.

Injuries have been a problem for the O-line. DJ Wingfield, a starting tackle, suffered a season-ending injury in the opener against Maine. James was hurt early in the New Mexico State game and missed the Fresno State game. Ise Matautia has been out for a while and is questionable for Saturday. O-line coach Jason Lenzmeier has been around for a while, and he says he’d never started as young a group as he did at New Mexico State. Gonzales says he believes the O-line is significantly improved over last year, but the record and the statistics do not reflect that.

Legendary former New Mexico Head Coach and current Defensive Coordinator Rocky Long returned to New Mexico in 2020 after spending eight seasons as the Head Coach at San Diego State. He is the mastermind behind the Lobos stifling 3-3-5 stack defensive scheme. Explain why Coach Long’s scheme is so difficult for opposing offenses to dissect and have success against.

Long’s defensive scheme is a high-risk, high-reward system that attempts to show as few tendencies as possible. It can be a nightmare for a young, inexperienced quarterback, and until the Fresno State game had been quite effective this season. A couple of starters are returning for Saturday, so that should help.

As you suggest, the players around Harris are good enough that it’s hard to focus on him. The front six, when healthy, is the unit’s principal strength.

The linebackers have had one constant each game this season, graduate senior Reco Hannah (9 starts in 28 career games) who has 40 tackles, 4.5 tackles-for-loss, 3.0 sacks, 1 forced fumble, 1 fumble recover, and 1 interception. The other two linebacker spots have been filled by 6 different players this season. Why have the other two spots been a revolving door and how difficult is it for Hannah to build chemistry when he seemingly never knows who is going to be lining up next to him?

UNM lost linebacker Alec Marenco to a season-ending injury, and starter Ray Leutele has been out for a while. Leutele’s expected return should help the entire defense be more effective.

The New Mexico defense has positions in the secondary that will not be familiar to the casual football fan. The Lobos start sophomore left WOLF Ronald Wilson (11 starts in 17 career games), graduate senior right WOLF Jerrick Reed (33 starts in 35 career games), and true freshman LOBO AJ Haulcy (4 starts in 7 career games). What role does each player fill in the defensive scheme and what are their responsibilities?

I confess I don’t know precisely the responsibilities of the wolf safeties. We know Haulcy, the Lobo safety, was a tackling machine against Fresno State — overtaking Reed as the team’s leading tackler by one tackle. Wilson and Reed, as you note, are experienced players. Reed, as a senior, is the linchpin. If cornerback Donte Martin returns from injury to start on Saturday, that’s a big plus for the defense.

The University of New Mexico now sits at a record of 2 wins and 6 losses. The last four games for the Lobos have been a tough road 31-20 road loss at UNLV, a 27-14 home loss to the University of Wyoming, a difficult 21-9 in-state rivalry loss to New Mexico State, and a 41-9 home set back to Fresno State. Has anything the Lobos have done thus far surprised you at all and what has really stood out to you now that they are eight games in?

I certainly thought the offense would be more productive than it has been. It’s clear to everyone that the offense has been predictable and not challenging for opposing defenses. After the bye week, with a healthier O-line and (possibly) receivers corp, with interim O-coordinator Heath Ridenour that much further along, we might see some advancements on Saturday.