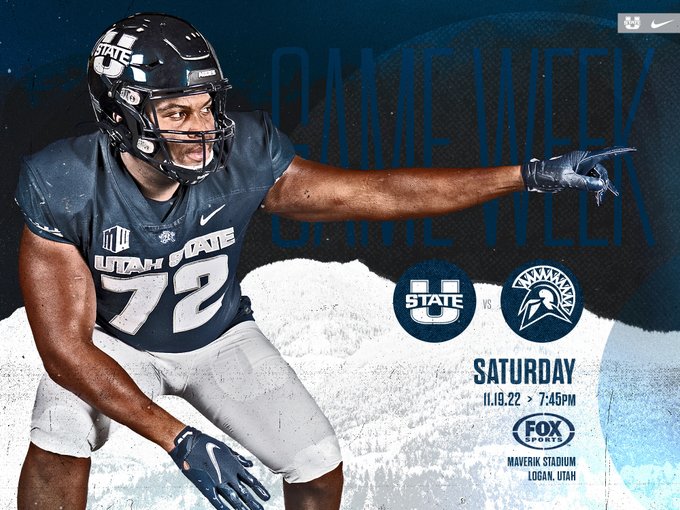 Matt Weiner who covers the San Jose State for the Mercury News, was kind enough to collaborate with me on a set of 6 questions about Utah State’s eleventh opponent of the 2022 season. The Aggies face the San Jose State Spartans at home Saturday night in a bid to become bowl eligible. It’s the seventh Mountain West Conference game of the year for Utah State. The Aggies are hoping to continue their winning streak in pursuit of bowl eligibility. Huge shout out to Matt for joining me this week!!

Head Coach Brent Brennan is in his 6th season at San Jose State. He’s had some moderate success recently and that often puts his name in the conversation for P5 jobs. How important has it been for the San Jose State program that Coach Brennan has remained with the program as long as he has and what does that mean for the immediate future?

It’s very important and has been an incredible ride. Especially when considering the team won three gaems in his first two seasons. I think it’s made everything that’s happened this seasons and 2020 so much more special for guys like Cade Hall and Junior Fehoko because they had to grind through so many disappointing weeks.

I think players respect a coach who’s wiling to take on the tough times and doesn’t jump ship when it seems like the boat’s capsizing.

As far as the immediate future goes, I have no clue. It can swing two ways. Either he’s done well enough to earn a head coaching spot at a bigger institution or he’s seen the turn around and wants to stick with it and ride it until the wheels fall off.

Not only the Spartan football team but the entire San Jose State family suffered a tragic loss when redshirt freshman running back Camdan McWright was killed in an auto-pedestrian accident. How was the team able to rally around and comfort each other in such a difficult time and STILL continue to not only play hard BUT win games.

It’s a really tough question on my end. For a situation as sensitive on this one I’d rather let a player or coach speak on it. Although I’m around the team nearly everyday I wouldn’t want to speak for them.

The Spartans added junior Hawaii transfer, Chevan Cordeiro, at quarterback during the offseason. All he’s done is throw for 2,420 yards on 196 completions with 14 touchdowns and just 3 interceptions. Talk about just how much the addition of Cordeiro has meant to the offense and what he brings to the table.

Chevan Cordeiro has been really special so far this season. Even with the Spartans laying an egg last week at SDSU, he still had three touchdowns. A few weeks back I called him Johnny Manziel if he was raised by the Amish.

Really great touch, rocket arm and can get it done with his legs if he needs to. He doesn’t have unreal tangibles, but he plays smart and knows the offense like the back of his hand. Also, throwing to Elijah Cooks doesn’t hurt.

Senior Kairee Robinson is the leading rusher for the Spartans with 479 yards and 9 touchdowns on 107 carries. Although he only averages just over 10 carries per game, what does Robinson bring to the table and how can he hurt the Aggies with his legs?

2022 hasn’t been an outstanding one for Kairee and the run game. They average the lowest rushing yards per game with 82.4 (Colorado State is second-lowest with 92.8).

Part of that is the offensive line, they’ve had their fair share of struggles this season.

When Kairee is at his best though, he’s a shifty bowling ball. He’s pretty small, but can get downhill in a hurry and against Western Michigan he essentially took a life on the goal line. If Kairee hurts Utah State it’s because he’s getting fantastic blocking upfront. I don’t think Kairee will be destructive if SJSU can’t block any Aggies.

The Spartan defensive line is loaded. Graduate senior defensive end Cade Hall (9 2022 starts, 52 career games) was named the Mountain West Co-defensive Player of the Year. He is second on the team with 10 tackles-for-loss and 6.5 sacks. Junior defensive end Junior Fehoko (9 2022 starts, 45 career games) is another pre-season All-Mountain West pick, he is second on the team in tackles with 57 and leads the team with 16 tackles-for-loss and 8 sacks. Graduate senior nose guard Lando Grey (7 2022 starts, 25 career games) plugs up the middle. Talk about how beneficial it has been for the Spartans to have such a wealth of experience and talent right up front on the defensive line.

I mean all the stats you listed show it. Those guys are monsters and it’s my favorite position group to watch at practice. While Cade and Junior might come off as ferocious, they are some of the most mellow and relaxed football players I’ve ever seen. They are teaching other guys like Noah Wright and Soane Toia constantly. Just fine tuning the smallest details like hand placement and footwork stuff that’s noticeable to the naked eye of average football fans.

DL coach Joe Seumalo has a big part to do with that as well. He’s great with them and has years of experience, successful ones I should add, and just flows really nicely with them. Also, the most talented guys have stayed healthy. Helps when that happens.

San Jose State now sit at a record of 6 wins and 3 losses. The last four games for the Spartans have been, a postponed game with New Mexico State, a 35-28 home win over the University of Nevada, a difficult 28-16 win at home over Colorado State, and a tough 27-43 road loss at San Diego State. First, do you forsee the game with New Mexico State ever being rescheduled and played? Also, has anything the Spartans have done thus far surprised you at all and what has really stood out to you now that they are nine games in?

Now that they clinched a bowl game I don’t see New Mexico State being replayed.

It’s tough to say that any of this has surprised me. All of the parts of the team that were supposed to produce are producing. Especially defensively, granted they were blown to bits by SDSU last week, but for the most part I think what fans have seen is a veteran replete squad coming together.

They just play with great cohesion and intensity and I think it shows on some of these wild stops in the red zone. Best example would be two weeks ago against Colorado State.