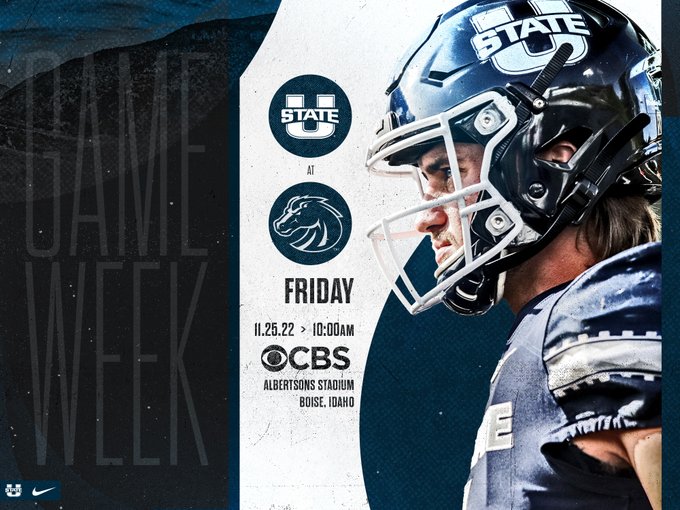 Ron Counts who covers the Boise State Broncos for the Idaho Statesman was kind enough to collaborate with me on a set of 10 questions about Utah State’s twelfth and final regular season opponent of the 2022 season. The Aggies face the Boise State Broncos on the road at 10 am Friday morning looking to pick up their fourth straight win and their sixth win in the last seven games. It’s the eighth Mountain West Conference game of the year for Utah State. Huge shout out to Ron for joining me this week!!

Head Coach Andy Avalos not only played at Boise State but also spent a large chunk of his coaching career there as well. He was named Head Coach prior to the 2021 season and has a career record of 15-8. Talk about the positives and negatives of his tenure thus far.

Year one didn’t go as planned for Avalos. The Broncos 7-5 record was one of their worst in more than a decade, but even last year, he proved he can prepare the troops for big games. Boise State knocked off then-No. 10 BYU and eventual conference champion Utah State on the road last season. Avalos is beloved in Boise. He’s a former player, and he’s all about preserving the “Bronco brotherhood.” He retained former BSU wide receiver, Matt Miller, as wide receivers coach, hired former BSU offensive lineman Nate Potter to coach tight ends, and convinced Chris Petersen disciple Keith Bhonapha to rejoin the staff. It would take something drastic to make Avalos’ seat warm anytime in the near future.

The 2022 season began under tumultuous circumstances, after starting the season 2-2, following a tough 27-10 loss to UTEP, offensive coordinator Tim Plough was fired and four-year starting quarterback Hank Bachmeier left the team just days later. The Broncos responded with four straight wins. How was Coach Avalos able to put things back together so quickly?

Avalos made a tough choice to fire Plough after less than two seasons on the job, but I think he made that decision in part because Dirk Koetter was already on staff as an analyst. Koetter has made all the difference since taking over as offensive coordinator. He simplified the scheme and has done a great job of putting players in a position to succeed and making in-game adjustments. Of course, it also helps to have a great defense to lean on and a 6-foot-6 quarterback who can run like a Gazelle.

Redshirt freshman Taylen Green stepped in at quarterback and has done remarkably well. He’s currently thrown for 1,510 yards with 8 touchdowns and 4 interceptions while adding 346 yards and 7 more scores on the ground. What does Green bring to the table as a quarterback and how was he able to step in and take over for Bachmeier so seamlessly?

Green is a freak athlete. He’s one of, if not the, fastest player on the team, and his insanely long stride makes everything he does look effortless. He has had to grow into the role of quarterback, though. His throwing motion and passing numbers weren’t pretty in his first couple of games, but he has grown by leaps and bounds in that regard. He’s the kind of athletic specimen college coaches want at quarterback these days, and it helps that he shares the backfield with two dangerous running backs, so teams can’t just key on him.

Redshirt junior George Holani (977 yards 10 TDs) and true freshman Ashton Jeanty (576 yards 6 TDs) are a great combination of thunder and lightning. Talk about what skills each player has and what makes them complement each other so well.

Both seem like future NFL players to me. Holani certainly has next-level vision and elusiveness, and he’s strong enough to run through tacklers. He has posted more than 100 rushing yards in five of the Broncos’ last six games, and he’ll go over 1,000 for the second time in his career this weekend. He rushed for 1,014 yards as a freshman in 2019. Jeanty is another physically impressive specimen. He doesn’t look like a freshman when he takes his shirt off, and he doesn’t run like one. He’s incredibly difficult to tackle, and his instincts are on par with Holani’s. Holani is likely heading to the NFL after this season, so Jeanty will run the show for the next couple of years.

The offensive line is loaded with experience as it boasts 6th-year left tackle John Ojukwu (48 starts 53 career games), senior Washington State transfer right tackle Cade Beresford (19 starts 25 career games), senior left guard Garrett Curran (24 starts 39 career games), junior right guard Ben Dooley (13 starts 18 career games), and senior center Kekaniokoa Holomalia-Gonzalez (14 starts 21 career games). Talk about how important it has been for the Broncos offense to have such a wealth of experience up front and how big a role did these guys play in the Bronco offense reigniting themselves?

All that experience on the offensive line hasn’t really paid off in recent years because of a long list of injuries. Ojukwu was the only offensive lineman to start every game in the same position last year, and he and Beresford are the only starters on the line who haven’t missed time this season. The interior of the line has greatly improved as the season has gone on, though. That’s been aided by guard Ben Dooley – the team’s most talented lineman – returning from injury in recent weeks. Green’s athleticism has also helped mask some of the deficiencies on the offensive line.

The Boise State trio of wide receivers is an intriguing one. The two seniors Billy Bowens (26 receptions 388 yards 4 TDs) and Stefan Cobbs (29 receptions 396 yards 2 TDS) are paired nicely with sophomore Latrell Caples (37 receptions 360 yards 3 TDs). Talk about what role within the offense each player fulfills and how they differ individually.

The receivers have only recently started performing up to expectations. They weren’t creating any separation from defenders through the first five or six games of the season, but they have come on as of late. The real issue with this receiving corps is it doesn’t have a true No. 1. Cobbs and Caples are basically the same players. They’re undersized but explosive, and would probably operate out of the slot in most schemes. Bowens has come up with some big catches of late, especially last week at Wyoming. A young wide receiver to keep an eye on is Eric McAlister, who is emerging as the team’s top deep threat.

The Broncos have two massive interior defensive linemen with senior defensive tackle Scott Matlock and sophomore nose tackle Herbert Gumms primarily manning each position. Talk about just how important it has been for the middle of the Broncos four-man front to be led by two players as talented and physically imposing as they are.

The real story about the defensive line this year is its improved depth. Injuries have taken a toll in recent weeks, but the Broncos opened the season with six or seven legit dudes in the trenches. Matlock is the unquestioned leader of the defensive line. He fights through double team after double team and still makes plays, and he tips the rest of the defense on if the opposing offense is going to run or pass on almost every play. He’ll be on an NFL roster next year. Gumms is a rarity in terms of his physical abilities. He was a 250-pound running back in high school. Now he’s a 300-pound defensive tackle who is insanely explosive. He and Ahmed Hassanein are the future of the Broncos defensive line.

The Bronco linebackers 6th-year senior Zeke Noa (46 tackles, 6.0 tackles-for-loss, 4.0 sacks) and senior DJ Schramm (78 tackles 6.5 tackles-for-loss) are two of the best in the Mountain West Conference. Just how big has it been for the Bronco defense to have to dudes like these two manning the middle of the 4-2-5 defensive scheme the last four or five years?

They’ve been huge, mostly because everyone assumed linebacker was going to be the Broncos’ weakness this year. Five-year starter Riley Whimpey exhausted his eligibility last year, and Noa has been up and down the past couple of seasons because of injuries. He’s injured right now and is unlikely to play on Friday. Schramm is a fifth-year senior who just earned a starting role this year. He was a special teams guy for most of his career, but he’s been playing out of his mind. He’s one of the surest tacklers on the team. A young linebacker to keep an eye on is Andrew Simpson, who the coaches say has a knack for rushing the passer.

In my opinion, senior safety JL Skinner (58 tackles 4 INTs) is an NFL-caliber player. Talk about his role within the Bronco defensive scheme, what his best attributes are, and do you share my thought about him being worthy of a shot in the NFL?

Skinner is the unquestioned leader of the secondary, and he’ll definitely hear his name called during the draft in April. I’ve seen one mock draft that had him coming off the board as soon as the second round. He has the size NFL scouts covet (6-4, 220). He proved last season that he can deliver bone-jarring hits (see his collision with Oklahoma State WR Brennan Presley). He hasn’t made as many splashy plays this year, in part because the defense is good enough that he doesn’t have to, but he has greatly improved his ball skills. Just take a look at the end of the Wyoming game if you need proof.

The matchup for the Mountain West Conference championship game is set for December 3rd and it will feature the Boise State Broncos at home against the Fresno State Bulldogs. These two teams have battled it out once already this season with the Broncos earning a 40-20 home victory on October 8th. What do you believe has changed between the two teams since then and do you foresee a similar outcome for the Broncos?

Both teams have changed since their regular-season meeting. Fresno State has been getting healthier. Neither quarterback Jake Haener nor star safety Evan Williams played at Boise State in October. They’re both back now, and that in itself is huge for the Bulldogs. Boise State’s offense has also grown by leaps and bounds since that first game. Koetter has things humming, the three-headed monster in the backfield has been tough to stop and Green is becoming more confident as a passer each week. That being said, I think the final score of the championship game will be much closer than the regular-season meeting.