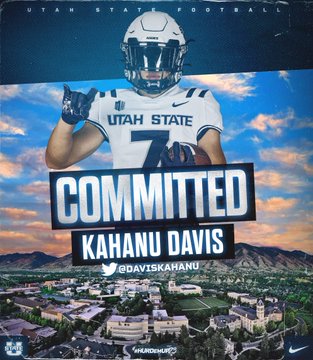 Utah State picked up a verbal commitment late last night from Southwestern College (CA) wide receiver Kahanu Davis. Davis was in Logan on his official visit over the weekend of December 16th. Davis is a 6 foot 0 185-pound sophomore and will join the Aggies in January and participate in spring football. He will have three years to complete his final two seasons of eligibility. During his career at Southwestern, Davis caught 36 passes for 583 yards and 5 touchdowns. He is the ninth junior college commitment and the eighteenth overall commitment for the Aggies 2023 recruiting cycle. At the time of his commitment, Davis held offers from Illinois State, Missouri State, Morehead State, San Diego, South Dakota School of Mines, and Wagner. Davis wrapped up his career at Southwestern after a tough season as the Jaguar went 1 and 9.