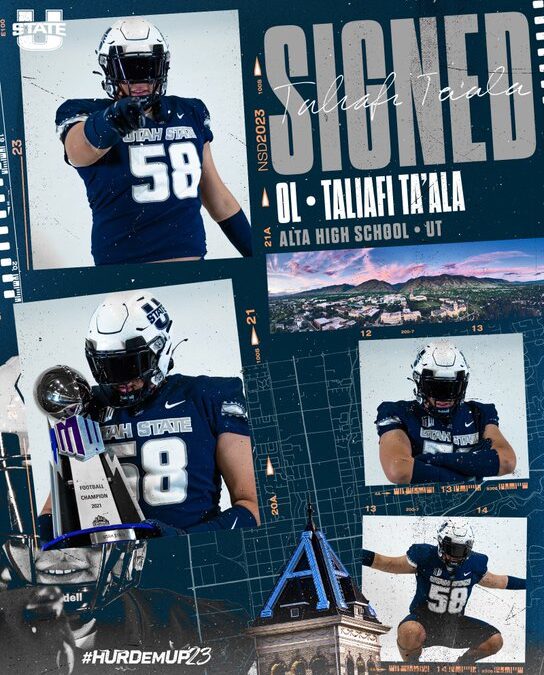 Utah State picked up a verbal commitment this morning from Alta High School (UT) offensive lineman Taliafi Ta’ala. Ta’ala was in Logan on his official visit over the weekend of December 16th and chose to make it official today. Ta’ala is a 6 foot 7 280-pound high school senior and will join the Aggies in June for the 2023 season. Ta’ala was a 4-year starter at left tackle for the Hawks. He was recently named to the 5-A All-State First-Team and First-Team All-Region 8. As a junior, he earned a 5-A All-State honorable mention nod and was named First-Team All-Region 8. He recorded an astounding 40 pancake blocks during his high school career. According to 247sports, Ta’ala is rated as the 38th-best tackle in the country and the 6th-best player in the State of Utah. His rating will rank him as the 2nd highest rated recruit the Aggies have ever signed. He is the ninth high school commitment and the twentieth overall commitment for the Aggies 2023 recruiting cycle. At the time of his commitment, Ta’ala held offers from Arizona, Arizona State, byu, Michigan, Michigan State, Oregon State, USC, and utah. Ta’ala wrapped up his illustrious four-year career at Alta by helping the Hawks go 6 and 6 and advance to the second round of the 5-A Utah State Playoffs.