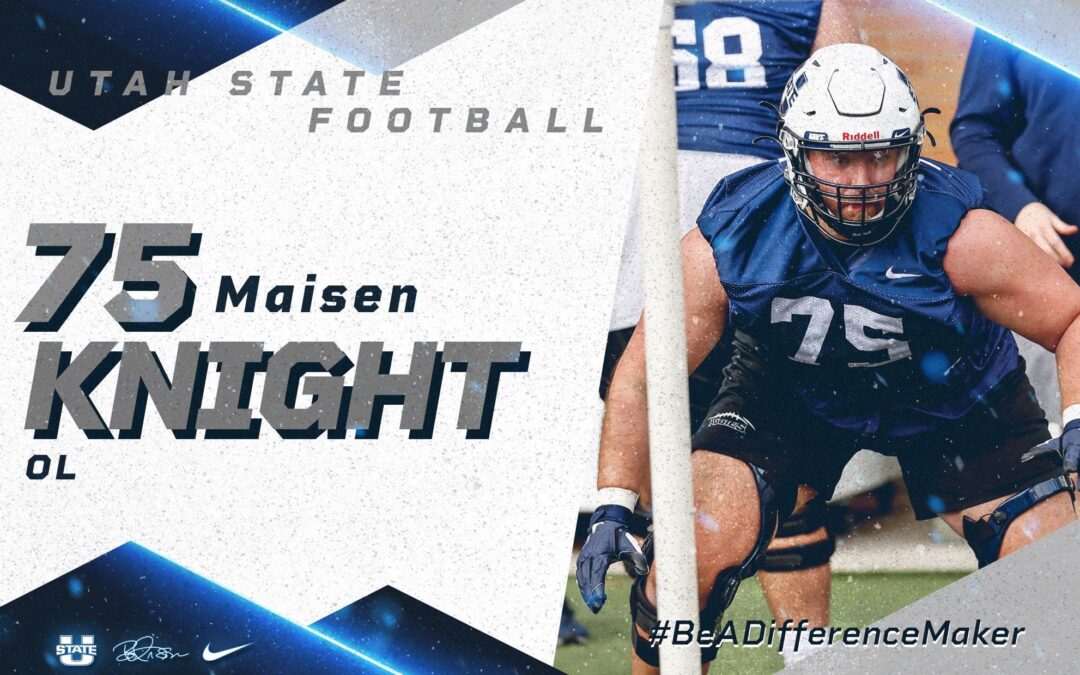 The Utah State coaching staff added a transfer offensive lineman into the fold on the evening of Tuesday, January the 12th when former Liberty University guard Maisen Knight accepted his scholarship offer. Rated a mid three-star by 247Sports coming out of Ventura Community College (CA), Maisen ranks as the No. 129 overall junior college prospect in the country, the No.15 junior college offensive lineman nationally and the No. 28 junior college prospect in the State of California in the 2018 class. Maisen currently checks in at 6 foot 4 and 300 pounds. As a senior in 2020, Maisen played in all 11 games at Liberty. As a junior in 2019, he saw action in 3 games.

I had the opportunity to have a Q&A with Maisen about his commitment to the Aggies.

BP: Have you already signed your letter of intent with Utah State?

MK: I am signing all of the scholarship papers on the 19th when I get there! There is no letter of intent as a grad transfer!

BP: Very cool! It will be very advantageous to get here early!

BP: What is your current remaining eligibility situation?

MK: 1 year left to play as a grad transfer!

MK: I loved my time at both of those schools. I was at Ventura College after high school in 2016 and went back there in ‘18. My first year I had around 20 offers, then I decided to go to University of Arizona. After multiple coaching changes I decide it was best to leave during that time. Every place I have been, I’ve been fortunate enough to make some really important connections. The 18′ Ventura team went 11-2 record and gained a berth in the CCCAA state championship game. While being there I earned all-conference honors each year. Liberty is building something special there and I am glad I got to be a part of it. For this last season I made the decision that I wanted to be closer to my family so that they are able to go to more games and see me play one more time.

MK: My interest grew with them growing up and attending their football camps in high school. I’m stoked to be apart of Utah State, and Coach Anderson is going to build something great here. I can’t wait for the fans to be able to go to games again and to fill Maverick Stadium to witness it.

BP: It’s cool that you have already been here and are kind of familiar with the area.

MK: I’m a leader by action, I think it will be nice for the younger guys to have an older guy come in with experience and knowledge. I hope to radiate confidence through my teammates and create a cohesive offensive line that all works together. I bring a violent mentality and play hard. It makes it easy to get into people’s head early in the game.

BP: I really like how confident you are! That type of leadership really rubs on your teammates on the field and in the locker room.

MK: I feel like I’m best in open space and when given the opportunity to pull. I like working a double team block that allows me to get you to the next level.

BP: What position do you plan on playing here at Utah State?

MK: They said they liked me at guard but also said that they liked that I have played multiple positions so they will move me around. I don’t have a preference as long as I’m on the field.

BP: That type of versatility has to be a huge plus not only for you but for the coaching staff as well.

MK: I want to come in and compete for a starting spot. I also want to spend a lot of time with (Strength and Conditioning) Coach (Paul) Jackson before spring ball starts. I have the goal to go to a bowl game and go win a bunch of games during the fall. I think we have the capability to.

BP: All of those are very solid goals!

MK: (Head) Coach (Blake) Anderson and (Offensive Line) Coach (Micah) James. I was talking to Coach Anderson one on one early. He recruited me while he was at Arkansas State.

BP: At the time of your commitment, what other schools did you have offers from and which ones were recruiting you the hardest?

MK: California, Toledo, and UNLV and some smaller schools all wanted me. However, Utah State was the best fit and closest to home

MK: It means a lot to represent my state. I have been doing it my whole college football career, there’s no better ending than to come home and play in front of family and friends.

BP: I can’t blame you one bit for wanting to finish it up like that. Welcome to Aggie Nation my man!

MK: I’m excited for the future with the Aggies!

First and foremost what Maisen brings to the table is an mature, experienced voice to the offensive line room. He was very accomplished at the junior college level and knows what it takes to be successful as an individual player. He will not only be able to lead vocally but by example as well. He is a very versatile player that will have the ability to play either tackle or guard position. His solid footwork and long wingspan are ideal for an offensive lineman and that helps keep the opposition at bay while pass blocking. He is quick enough to get to  the second level and clear out linebackers. He attacks the run game with aggression and isn’t shy about driving opposing players into the ground. As a graduate transfer, Maisen will have every opportunity to compete for a starting role and he will really benefit from arriving at Utah State in time to participate in spring ball.