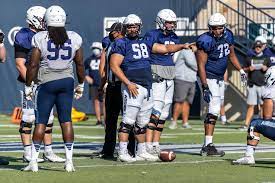 Graduate senior Demytrick Ali’ifua should be a lock to continue to hold the top spot on the depth chart. As a senior in 2020, Ali’ifua started in all 6 games and for his effort he earned a Mountain West Conference Honorable Mention nod. As a junior in 2019, he started in all 13 games and played 991 snaps, and recorded 33 knockdown blocks. As a top reserve and often being rotated into the starting lineup, he played in all 13 games in 2018, starting in 2 of them while taking 380 snaps and recording 19 knockdowns. As a redshirt freshman in 2017, he started 2 games and played in all 13, as he saw time at both center and guard. He was hands down the most reliable 2nd team offensive lineman, as well as the most frequently used, as he graded out at a modest 79%, recording 20 knockdowns and playing 399 snaps. Ali’ifua is the younger brother of former Aggie defensive end, Ricky. He is a very strong, physical player. He is deceptively athletic. He has a high football IQ and can play both center and guard. He has developed into a physical player who is showing flashes of having all the tools to become an excellent offensive lineman. Coaches feel that what sets him apart is his power, intelligence, and his versatility that made him a great two-way player coming out of high school.

Competing to make a move up the depth chart is graduate transfer senior Maisen Knight. Knight joined the Aggies in time for spring ball after spending two seasons at Liberty University. As a senior at Liberty in 2020, he appeared in 11 games. As a junior in 2019, he saw action in 3 games. As a redshirt sophomore in 2018, he returned to Ventura Community College (CA) where he spent the season as a starter. As a sophomore in 2017, he redshirted at the University of Arizona. As a true freshman in 2016, he began his collegiate career as a starter at Ventura Community College (CA). First and foremost what Maisen brings to the table is a mature, experienced voice to the offensive line room. He was very accomplished at the junior college level and knows what it takes to be successful as an individual player. He will not only be able to lead vocally but by example as well. He is a very versatile player that will have the ability to play either tackle or guard position. His solid footwork and long wingspan are ideal for an offensive lineman and that helps keep the opposition at bay while pass blocking. He is quick enough to get to the second level and clear out linebackers. He attacks the run game with aggression and isn’t shy about driving opposing players into the ground. As a graduate transfer, Maisen will have every opportunity to compete for a starting role and he will benefit from arriving at Utah State in time to participate in spring ball.

Adding depth to the position is preferred walk-on true freshman Jonah Hayes. As a senior in 2021 at Evergreen HS (WA), Hayes started in all 6 games during a COVID abbreviated spring season. Hayes loves to use his huge frame to quickly put opposing players on the ground. He has a road-grading style that he uses to clear an opening in the run game. Hayes is a young player with promise. I see him spending the season as a member of the practice squad while he redshirts.

Likely earning the top spot at this position is TCU transfer junior Quazzy White. White transferred to the Aggies in January and participated in spring ball. As a junior at TCU in 2020, he started 3 games and then missed the remainder of the season with an injury. As a sophomore in 2019, he played in all 12 games and earned 3 starts. As a redshirt freshman in 2018, he saw action in 6 games. As a true freshman in 2017, he sat out the season while redshirting. Quazzy is a gritty, grinding offensive lineman who plays with an ever-running motor. He is often looking for the knockdown block and he isn’t shy about it either. He is a powerful blocker who contains defenders with his large frame and mobility. He is very good at finishing off his initial block and then he goes looking for another block to make farther downfield. He is quick enough on his feet that pulling from either the guard or tackle position is not a problem. White is extremely fluid and balanced as he moves backward in pass-protection. He picks up blitzes well and keeps his head up to see defensive schemes. With some recent departures from the Utah State offensive line, adding Quazzy to the Aggie roster was a perfect match. He will greatly benefit from enrolling at Utah State in time to go through spring ball and get acclimated with the new Aggie offensive scheme. He brings experience against top competition and should play right away.

Battling for playing time will be sophomore Jackson Owens. As a redshirt freshman in 2020, Owens saw action in 4 of 6 games. As a true freshman in 2019, he played in 30 snaps and recorded 1 knockdown block while playing in 3 games and remaining eligible to receive a redshirt season. As a senior in 2018 at East High (UT), he earned a 6-A all-state honorable mention nod after helping lead the Leopards to a 7-3 record and a berth in the Class 6-A state playoffs. Owens was a road-grading offensive lineman for the vaunted East rushing attack that chewed opponents up. He is a good athlete that also participated in several track events in high school. He gets a great push at the line of scrimmage when opening holes for run plays. He stays low despite his height and uses both his upper and lower body very well. He is already solid as a run-blocking guard and will likely develop into a well-rounded lineman.

Competing to make a move up the depth chart is junior Wyatt Bowles. As a sophomore in 2020, Bowles did not see any action. As a redshirt freshman in 2019, he was injured early in fall camp and missed the entire season. As a true freshman in 2018, he took 47 snaps while playing in the maximum 4 games allowed and still being able to receive a redshirt season. As a senior at Syracuse High (UT) in 2017, Bowles earned 6-A second-team All-State and Region 1 first-team honors as an offensive lineman. He also showed his versatility by recording 27 tackles and 5.0 sacks as a defensive lineman. The Aggies landed Bowles on signing day, despite a late push from Oregon State. The Aggie coaching staff believes that he has a bright future at Utah State. He has shown a lot of upside during his development. He needs to stay healthy to get on the field and show what he can do. He has a high football IQ, athleticism, and the flexibility to play anywhere from tackle to center.

Coming up on Friday: Center