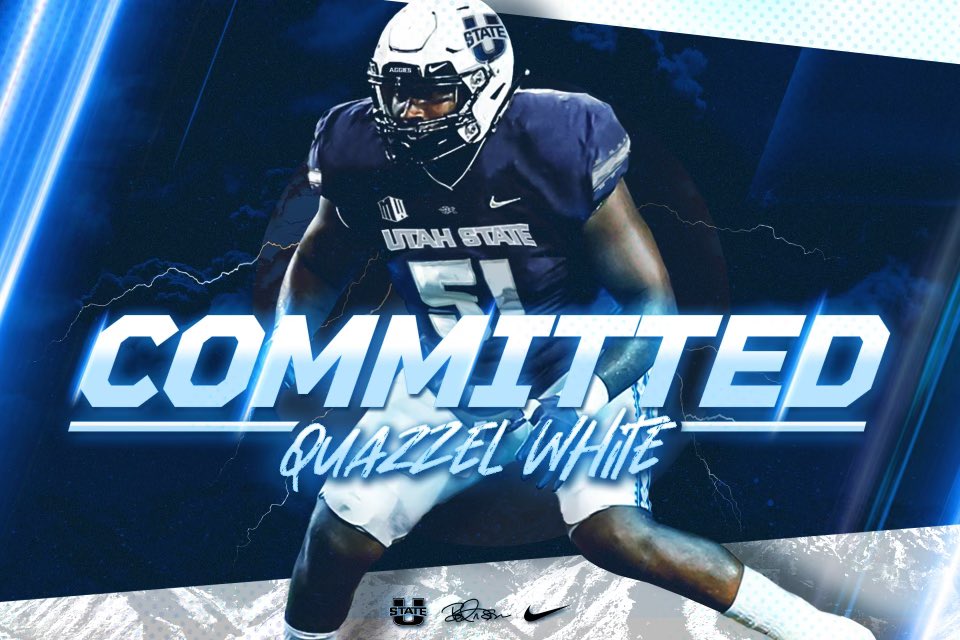 The Utah State coaching staff added a transfer offensive lineman into the fold on the afternoon of Sunday, January the 17th when former Texas Christian University (TCU) guard Quazzel (Quazzy) White accepted his scholarship offer. Rated a mid three-star by 247Sports coming out of Lincoln High School (WA), Quazzy ranks as the No. 1,351 college prospect in the country, the No.67 offensive lineman nationally and the No. 16 college prospect in the State of Washington in the 2017 class. He currently checks in at 6 foot 3 and 317 pounds. As a junior in 2020, Quazzy started the first three games of the season for TCU and then missed the remainder of the season with an injury. As a sophomore in 2019, he played in all 12 games while earning starts in three games.

I had the opportunity to have a Q&A with Quazzy about his commitment to the Aggies.

BP: First question, what is your transfer situation? Are you a graduate transfer?

QW: I am just a transfer not graduate transfer.

BP: Will you need to apply for immediate eligibility?

QW: As of right now I’m not sure but I will be able to find out very soon.

QW: Yessir I will. I just landed (in Utah) today.

BP: Can you talk briefly about your career at TCU and your decision to leave?

QW: For the people out there that want to know, this wasn’t a situation where I’m transferring because I’m not getting playing time. In fact I was. But because of certain circumstances and unfortunate events I entered the transfer portal looking for a new home. I’m also looking to somewhat be closer to home. I loved playing with great players and becoming lifelong friends with a lot of people. Thankful for the journey and process and thankful to have met those coaches. Played a lot of games at TCU, played mainly at guard and tackle.

BP: Very cool! I like your grateful attitude about leaving a place that you have called home for the last three years.

BP: What position do you plan on playing here at Utah State?

QW: Whatever they tell me.

BP: Haha! Do you have a preference?

QW: No sir. Playing both positions shows I’m versatile. I like that. I also like to show my athleticism when facing different opponents

BP: Athleticism and versatility are always great to talents to have. It makes is easier to get you on the field!

QW: Great program, I was recruited by them HS so now I already had my little bit of history.

BP: I remember you being recruited out of high school! I was hoping we would be able to bring you in back then!

QW: I feel like I’m a good athletic offensive lineman that can do everything anyone asks of me. I feel like I bring IQ, savvy, swag, asshole-ness to the table when I step onto the field.

BP: Haha! I love the brash conference that you bring to the table. There is nothing wrong with that!

QW: Like I mentioned earlier, I just feel like my athleticism helps my advantage out a lot, I’m strong but that’s not my best trait. Along with an attitude, I’m very loud when I play you will see me or hear me.

BP: I’m excited to see the boost in moral and your vocal leadership when you hit the field in March for spring ball!

QW: Just to come in and be on the same page with the whole team. Winning a championship is the only goal I have on terms on games and winning. Other than that hopefully I can put a a good enough season to declare for 2022 draft. But the main focus is to win and work with my team. The rest will handle itself.

BP: I love that attitude! Control what you can and make things happen!

QW: Really all of them. They did a great job recruiting me, it wasn’t just one coach on the job.

BP: At the time of your commitment, what other schools did you have offers from and which ones were recruiting you the hardest?

QW: Utah state showed the most love and was really eager to get me in school. Which was something I needed to do.

BP: Very cool! Aggie Nation is very happy to have you my man!

QW: Yessir thank you for reaching out. I’m happy to be a(n) AGGIE! I can’t wait to show fans where this direction is headed!

Quazzy is a gritty, grinding offensive lineman who plays with an ever-running motor. He is often looking for the knockdown block and he isn’t shy about it either. He is very good at finishing off his initial block and then he goes looking for another block to make farther down field. He is quick enough on his feet that pulling from either the guard or tackle position is not a problem. With the some recent departures from the Utah State offensive line, adding Quazzy to the Aggie roster was a perfect match. He will greatly benefit from enrolling at Utah State in time to go through spring ball and get acclimated with the new Aggie offensive scheme.