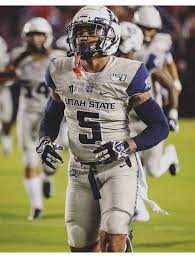 2020 Players not returning: None

Earning the starting spot here is graduate senior Cash Gilliam. As a senior in 2020, he played in 3 games, earning 2 starts, and totaled 20 tackles, 2.5 tackles-for-loss, and 1.0 sack. As a junior in 2019, Gilliam fought off a nagging injury suffered in fall camp to play in 9 games and earn 2 starts, while pulling in 15 tackles, 1.5 tackles-for-loss, and 1 forced fumble. As a sophomore at Arizona Western Community College (AZ) in 2018, he rolled up 46 tackles, 2.5 tackles-for-loss, 2 interceptions, 7 pass breakups, and 1 forced fumble. Gilliam spent the first two seasons of his collegiate career at the University of Kentucky. Gilliam is the ultimate competitor, always bringing his best and always ready to play football. He has a very good skill set. He is a natural at playing safety and does well roaming around using his eyes to read plays and react. He can step in and cover receivers in the slot and does welling matchup up with them. Likewise, he can step up and aid in the run game, using his speed and physical nature to make an impact. He is said to have quite a bit of swagger to him and has the makings of a leader on the defense.

I see junior Patrick Maddox having a pretty firm hold on the second spot on the depth chart. As a redshirt sophomore in 2020, he played in 4 games but he did not record any stats. Maddox had to sit out the 2019 season as a redshirt per NCAA rules following his transfer to Utah State after spending his first collegiate season at Linfield College. Following the conclusion of the 2019 season, he was voted the Defensive Scout Team Player of the Year by his teammates. As a true freshman at Linfield College (OR) in 2019, Maddox saw action in 6 games and was credited with 7 tackles. Maddox does a good job of dropping back into coverage and watching the opposing quarterback’s eyes and then making a play on the ball. He is a strong tackler, who enjoys the physical contact that comes with playing defense. He closes out well on opposing ball carriers. I think he fits very well at the striker position.

Competing for playing time will be sophomore Kaleo Neves. As a redshirt freshman in 2020, he played in all 6 games, earning 1 start and recording 5 tackles. As a true freshman in 2019, Neves played in 4 games, while maintaining his redshirt status and was credited with 2 tackles. As a senior at Timpview High (UT) in 2018, Neves played through an injury-plagued season that limited him to just 8 games. Despite the injury bug, he was able to log an impressive 28 tackles, 11.0 tackles-for-loss, 7.0 sacks, and 6 quarterback hurries. Neves is a quick-twitch athlete with light, bouncing feet. He can stick his foot in the ground and redirect quickly to mirror the change of direction from running backs and quarterbacks. He is a textbook tackler who can run all over the field, whether it is in coverage or as a blitzer. He does a great job putting himself in a position to be around the ball to make a play. When in coverage, he’s good in zone coverage where he can keep the play in front of him and close in to make a big open field tackle.

Adding depth to the position will be sophomore Breaker Mendenhall. As a true freshman in 2020, he saw action in 3 games but did not record any stats. As a senior at Western Albemarle High (VA) in 2019, Mendenhall earned All-Central Virginia second-team as a defensive back. He was also versatile enough to earn first-team all-Jefferson District honors as a wide receiver. Mendenhall was a two-way player with a strong ability to high point the ball in the air and that will help him substantially on defense. He has long strides and gets downfield in a hurry. He brings nice length to the safety position that will be helpful covering bigger wide receivers. He should develop nicely in an FBS strength and conditioning program.

Coming Up On Thursday: Inside Linebacker