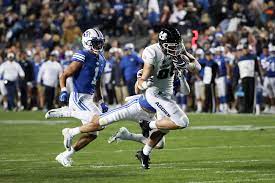 Carson Terrell returns for his senior season as the undisputed starter at tight end. As a senior in 2020, Terrell played in 4 of 6 games, including 3 starts, and caught 4 passes for 62 yards and 1 touchdown. As a junior in 2019, he played in 12 of 13 games, starting in 10 of them, and pulled in 13 receptions for 84 yards. As a sophomore in 2018, he played in all 13 games, starting in 3 of them, while grabbing 10 passes for 150 yards and 1 touchdown. As a true freshman in 2017, he saw plenty of action, playing in 12 of 13 games and pulling in 10 passes for 107 yards. As a prep senior in 2016 at Lehi High (UT), Terrell earned 5A First-team All-State and First-Team Region 4 honors at tight end from both the Salt Lake Tribune and Deseret News, after logging 57 receptions for 837 yards and 8 touchdowns. Terrell ended the 2017 recruiting period rated as the No.13 tight end in the West and the No.53 tight end in the country by 247sports.com and he had offers from several P5 universities. Terrell is an athletic tight end who runs great routes and has great hands. He also possesses good size, speed, and athletic ability. He brings a mature, physical presence to the field. He has great ball skills and excels at running with the ball after the catch. Having him put together a 20+ catch season would be a big boost for the Aggie offense in 2021.

Sophomore Broc Lane made a big splash last season during fall camp and is looking to build on the momentum he’s built over the offseason. As a true freshman in 2020, he saw action in all 6 games and caught 2 passes for 9 yards. As a senior at Perry High (AZ) in 2019, he snagged 23 receptions for 265 yards and 5 touchdowns. Lane is a physical playing on both sides of the ball but will be joining the program as a tight end. He is quick and has nice footwork while running routes, make it easy for him to gain separation. He excels in the middle of the field, whether piling up yards after a short catch or running down the seam for a big play. He is constantly looking for the ball and displays great hands. Once he becomes more familiar with what will be asked of him as a run blocker, he will develop into a solid asset for future Aggie teams.

Sophomore Josh Sterzer is one of two young players that will be battling for third-team reps. As a true freshman in 2020, he saw action in 3 games, including 1 start but he did not record any stats. He returned home from serving an LDS Church mission and enrolled at Utah State in January of 2020. As a senior at Taylorsville High (UT) in 2016, he pulled in 19 receptions for 423 yards and 5 touchdowns. He was also a force on the defensive side of the ball racking up 72 tackles, 22.0 tackles-for-loss, 11.0 sacks, 5 QB hurries, and 1 forced fumble. Sterzer runs crisp routes in the short passing game and he could easily become an option as a safety valve. He can turn to get out and run when he gets in the open field and he can be a physical blocker on the line with running plays. He has sure hands and could become a valuable target in the red zone. He may need some time to get back up to speed but has value in the passing game.

The second player battling to move up the depth chart is sophomore Jack Drews. As a redshirt freshman in 2020, he did not see any action. As a true freshman in 2019, he saw action in 1 game, which allowed him to maintain his redshirt status. As a senior at Ramona High (CA) in 2018, Drews spent most of the season on the defensive side of the ball. Offensively he recorded 2 receptions for 23 yards. On the defensive side of the ball, Drews rolled up 88 tackles, 15.0 tackles-for-loss, and 2 fumble recoveries. For his effort, he earned second first-team All-League and was voted Team Defensive MVP for a second straight season. He spurned the opportunity to play with his brother at the University of Utah to commit to Utah State. Drews is a physical player on the field that gives his all on the field and in the program. He is often one of the smartest players on the field. He is a steady blocker who will make a difference in the run game with his big hits. As a receiver, he has reliable hands and a good route-runner, doing a lot of his work in the short passing game over the middle of the field. He should develop into a capable tight end before his college career is completed.

Adding depth to the position is true freshman Jack Rigby. Rigby joined the Aggies in time for spring ball following his return from serving an LDS Church mission. As a senior at Davis High (UT) in 2018, he snagged 35 receptions for 621 yards and 6 touchdowns. For his effort, he was named to the Region 1 first-team. As a junior in 2017, he recorded 13 receptions for 142 yards. He is an impressive route-runner with reliable hands that allows him to make difficult catches. He can also line up on the outside, where he is a mismatch with his height and deceiving speed. He can develop into a prime target in the red zone and works hard to gain separation.

Joining the Aggies this summer is true freshman Parker Buchanan. As a senior quarterback at Box Elder HS (UT), in 2020, he racked up 82 completions in 156 attempts for 1,149 yards, 8 touchdowns, and 7 interceptions. He also tallied 130 carries for 710 yards and 7 touchdowns. He even recorded 2 receptions for 40 yards and 1 touchdown. As a junior in 2019, he had a slightly better season with 112 completions in 223 attempts for 1,702 yards, 15 touchdowns, and 7 interceptions. He also carried the ball 111 times for 375 yards and 7 touchdowns while adding 1 reception for 27 yards. As a sophomore in 2018, he logged 62 completions in 138 attempts for 910 yards, 11 touchdowns, and 5 interceptions while adding 55 carries for 24 yards and 5 touchdowns. As a two-sport athlete Buchanan has developed into a very mobile athlete and thanks to his basketball roots, he also has good feet/footwork and that translates well onto the football field. When he runs, he runs with power and purpose and he isn’t afraid of contact. In terms of playing tight end it would be nice to have seen some footage of him catching more than one pass but oftentimes at the high school level the best athlete on the field is the quarterback and in looking over football and basketball film of him, he is every bit of the term athlete and that will serve him best at the next level as an Aggie at Utah State.

Coming Up On Wednesday: Striker